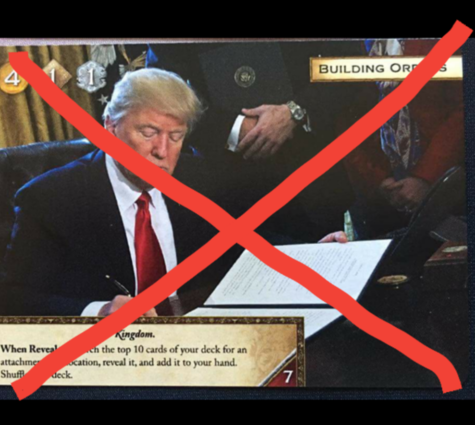 Do not tolerate this alt-art Building Orders

To Whom it May Concern:

We writing to raise our concerns about an alternate art card which is currently being planned to be distributed at the “Festival of Fools” Game of Thrones LCG event on April 1st.

The card in question features the image of President Trump signing an Executive Order over the game text for the Building Orders plot. This combination is an explicit reference to the “Build the Wall” chant, which is used first and foremost as a rallying call for the denigration, exclusion, and removal of immigrants and minorities. In this context, we believe that this alternate art card will convey the same message of non-welcome to participants at this event -- or to any other event it turns up at afterwards. Allowing it to be present signifies to certain players that they are not wanted around. As such, it directly fosters an atmosphere of negativity, exclusivity, and antagonism to many potential participants.

While we cannot claim to speak for the entire player base, we have always felt that the AGOT community was an intentionally inclusive and accepting one. Tolerating a card which carries the implication of such opposing values will not only hurt the credibility of your event in this regard, but it will also risk besmirching the values of the greater Thrones community as well.

As such, we asking that

This zero-tolerance response is necessary in order to ensure that this event is welcoming and opening to all persons, and so that our community can remain one of inclusivity and camaraderie.
Thank you