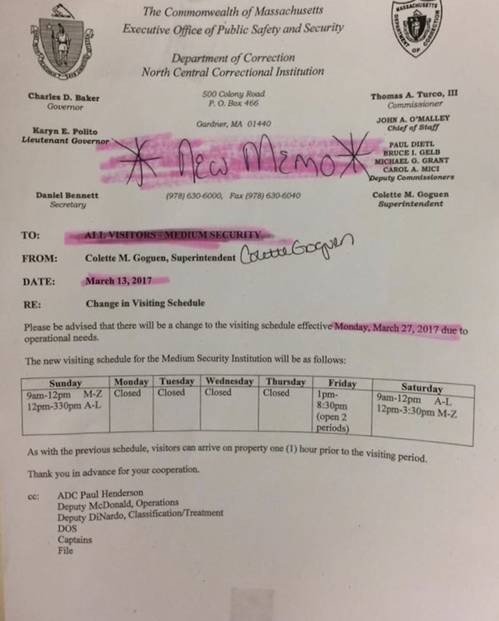 Do not reduce family visitation schedule at NCCI GARDNER!!!!

On Monday March 13, 2017 NCCI Gardner Superintendent Colette Goguen posted a memo stating that as of March 26, 2017 due to a vague reason of "operational needs" the Family visitation schedule would yet again be altered dramatically. This new policy eliminates Monday visits all together, moves visit times, shortens those visits, and removes 5-8pm weekend times.

NCCI Gardner use to allow Thursday visits as well. That day was said to be taken away temporarily, but was never returned to the schedule. Now these changes.

By doing this NCCI Gardner is going against the entire rehabilitation and recidivism philosophy the Massachusetts Department of Correction stands by.

95% of state inmates will be released from State Prison and having those strong family support systems in place gives inmates a greater chance of exiting the system and not returning to it.

They are also punishing the families and especially the children who depend on visit consistency in an all ready tough time in their lives.

Governor Charlie Baker said it best recently, “Prison is, as it should be, a punishment, But the people of Massachusetts are better served when more individuals exit the system as law-abiding and productive members of society.”

These visits and connections play a pivotal role in families staying together and gives inmates that driving force to better themselves and engage in the programming set forth by the DOC for rehabilitation and successful reentry.

I urge you to sign, add your comments, additional reasoning and pass along this petition so that the Governor, Commissioner, and Superintedent can see how allowing NCCI Gardner to yet again take away more visit periods would be breaking the connections that play a big part of rehabilitation, successful reentry and give children the chance to have a consistent relationship with their fathers, uncles, and friends who are currently incarcerated.