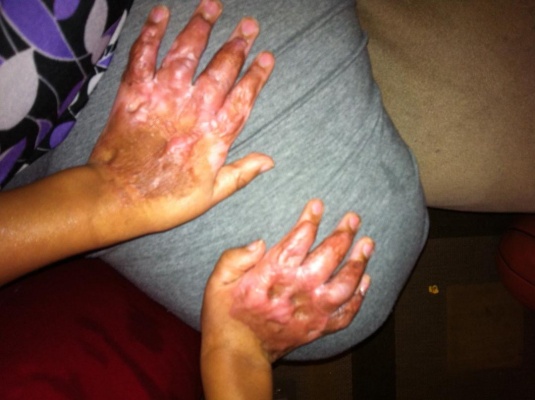 JUSTICE FOR MALACHI ! DO NOT FREE DANTE ROBERSON

Malachi Roberson a 10 year-old boy of Lancaster , California whose father Dante Roberson of San Leandro Ca, ( docket# H55115) burned his hands in hot water 8.5 years ago when he was only two years old.

Dante Roberson, who was convicted in December 2015 of felony child abuse for burning the then 2-year-old boy’s hands in September 2011.

The boy suffered second and 3 rd degree, glove like burns consistent with having one’s hands forcibly submerged in hot liquid.

The boy was alone with his father at the time and his mother took him to the hospital when she first saw the injuries hours later, according to the Alameda County District Attorney’s Office.

The boy had multiple surgeries and continues to suffer both emotionally and physically.

This has a lifelong injury and it’s not ever going to go away.

Roberson was given 9 years in prison and currently served only 4 out of the 9 years. A judge Has overturned the case on a technicality . February 3 2020. The case was heard and continued to Feb. 5th . Where a decision will be made to release him or re try the case .

STAY IN JAIL AND SERVE ALL OF HIS PRISON TIME!!!