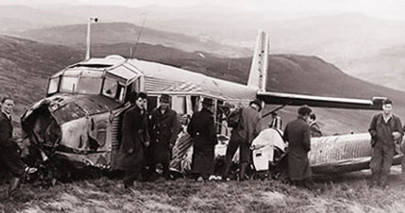 Friday, the 12th of August, marks the 70th anniversary of a plane crash in the Wicklow Mountains in which everyone miraculously survived. The plane was carrying 21 French Girl Guides and 5 crew from Paris to Dublin when it got lost in bad weather conditions and crashed into Djouce Mountain.

The story of the ensuing events in the immediate aftermath of the crash to help raise the alarm and the resulting search party sent out to try and locate the remaining injured people on the plane has outgrown it's local folklore status in recent years and gained international attention with the publishing of the book 'When Our Plane Hit the Mountain' by Suzanne Barnes in 2005.

In 1996, prior to the 50th anniversary of the crash, an article about the event by Bill Nelson was published in a Wicklow newspaper. Local Greystones woman, Eileen Whooley, used her links to send a copy of the article over to France for the attention of one of the survivors of the plane crash, Chantal de Vitry. From here, a chain reaction took place. Chantal tracked down the other survivors of the crash and a series of annual reunions started to take place, which included some trips to Ireland to revisit the site of the crash.

As a tribute to their enduring friendship and an acknowledgement of the event, it seems only right that a simple commemorative plaque should be placed in the Wicklow Mountains to mark the exact location of the crash. Ideally this should be within the lifetime of the surviving members of the crash, most of whom are now in their late eighties.

In the lead up to the 60th anniversary of the crash, this idea was presented to the National Parks and Wildlife Service by aircraft enthusiast Peter Johnston. Permission to erect such a plaque was flatly rejected however, as they were being inundated with numerous requests for personal memorials and other markers on their property. As this is an event that can only ever have one definitive location within the Wicklow Mountains National Park, it should really take precedence over other requests.

With all remaining evidence of the wreckage of the plane having disappeared over time, the exact location of the crash has now sometimes been queried. This becomes evident when noting the movement of it's location between the first and second edition of the Dublin and North Wicklow Mountains by EastWest Mapping. This highlights the need to have some kind of physical marker on the ground to help identify the location of the crash.

As we arrive at the 70th anniversary of the event, this is an ideal opportunity to revisit the idea of getting a plaque put up on Djouce. Before approaching Wicklow Mountains National Park to seek their permission, it would be great to hear the voice of the general public and what your opinion is on the matter. Your signature on this petition would be greatly appreciated and any further comments you wish to make.