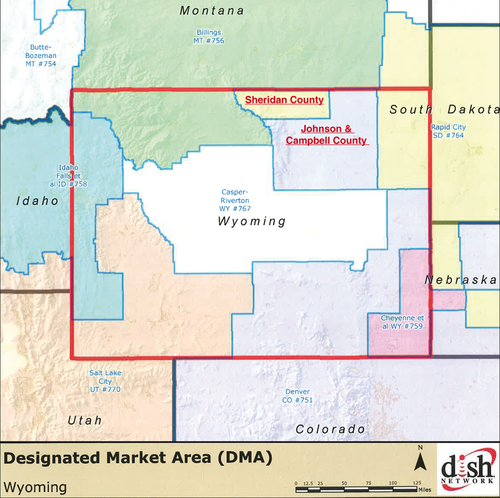 DISH Denver Channels: We Want Them Back

The Federal Communications Commission and Duhamel Broadcasting of Rapid City, SD or its successors are discriminating against Sheridan County, Wyoming by declaring Sheridan County to be part of Duhamel's South Dakota Designated Market Area (DMA). As such, Sheridan County is banned from receiving Denver's ABC, CBS, NBC and Fox "locals" channels. Currently, DISH gives us KOTA (ABC) and KVEN (Fox) from Rapid City and KELO (CBS) from Sioux Falls, SD (transmitted via KCLO Rapid City). KELO/KCLO uses the Central Time Zone for its programming. We do not get NBC from any source. In addition, Sheridan County DISH subscribers are unable to receive Wyoming Public Television and, instead only get PBS from Sioux Falls, SD. DISH blocks Denver sports (Broncos, Rockies, Nuggets, Avalanche plus UC and CSU) and Denver News from Isolated Sheridan County (see map), while Campbell County and Johnson County both receive the "Denver locals." We have no issue with Sheridan County being Rapid city's DMA. We just want our Denver channels back. Sign this petition and it will be presented to the Sheridan County Board of Supervisors who can then petition the FCC for modification under the FCC’s Satellite Television Extension and Localism Act of 2014 (STELAR) Market Modification Act Reauthorization Authority.