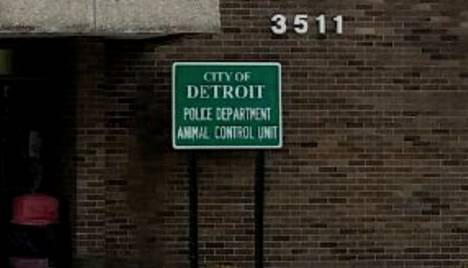 An older gentleman came to Detroit Animal Control today (Dec 2015) to get shots & licenses for his 3 dogs. He said he had been wanting to get this done for months, but he was very worried...
Last spring he didn't finish his probation for driving on a suspended license (he completed it all, but couldn't pay his fines) so he has a warrant.
He was worried if he went to Detroit Animal Control, he would be arrested because it's also a police department. <<He thought
He seen the news story this week with Mayor Odette, Red, The Birds, & Lucky...
VIEW THE STORY HERE

He knew that if unlicensed, his dogs were more likely to end up in the diseased filled facility of Detroit Animal Control... His dogs would be neglected, left to sit in their own waste. They would not be leaving the DAC facility the same happy healthy pet they came in as; if they ever left at all.

He said "I knew I couldn't wait any longer, no matter what happened to me"
He even brought a friend to take his dogs "just in case"

*yes, We informed him he was fine, this was not a police station, they weren't cops, & they weren't going to run his name (they can't even run a credit card machine)

*guarantee some people are afraid to fight for their dogs because this misrepresenting sign makes them feel like they've got no choice.

750.33a Character or extent of business misrepresentation; penalty.

Any person who states, in an advertisement of his goods, that he is a producer, manufacturer, processor, wholesaler or importer, or that he owns or controls a factory or other source of supply of goods, when such is not the fact, or in any other manner knowingly misrepresents the character, extent, volume or type of his business, is guilty of a misdemeanor.