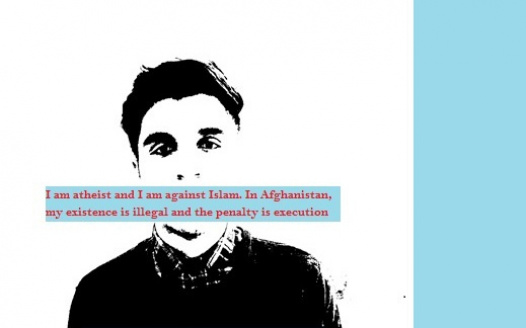 Deportation of young atheists will get him executed in Afghanistan!

1238 people have signed this petition. Add your name now!

Deportation of young atheists will get him executed in Afghanistan!

The 20-year-old man, who goes under the pseudonym Fawad Noori, becomes the first atheist ever to be deported to Afghanistan from Denmark.

Lost all his family Fawad fled as a 16-year-old to Denmark as an unaccompanied child in December 2013. He had previously lost both his father and sister because of a bomb. After the death of the father, the uncle - a Taliban, wanted to force him to be a part of the Taliban Movement. The uncle also wanted forcely to marry his mother. Fawad and his mother choose to escape, but Fawad's mother disappeared while on the run when they were forced into two different cars by the smugglers. Despite several searches, it has not been possible to find her, now leaving Fawad without any family.

Atheism Due to his hopeless and tragic life situation, he tried to commit suicide as a 17-year-old in 2014. Low self-esteem, lack of belief that life is predetermined, and his distance to Islam lead to him becoming an atheist. In early 2016, he releases a video on Facebook begging the Afghan people to distance themselves from Islam and stop the killings and also requesting that the Afghans should instead use their intellect and reason to set the framework for a good life. Shortly after the video is released, he receives death threats and is completely excluded by all his friends and surroundings, both at the asylum center and elsewhere. He is being confronted at his asylum center by 3 foreign men in a car that threatens him because of his statements about Islam. The police will not make report, but the Immigration Service thinks that it is best that he will be transferred to another asylum center across the country. Due to the many death threats, especially from former friends who have been deported to Afghanistan, he gets scared and fear for his life.

By the end of 2016 Last year he was imprisoned to be deported back to Afghanistan, but his laywer were able to reopen his case. In the time being in prison he got death threats from some Muslims also waiting to be deported. The staff/police decided to isolate him from the other inmates because of security reasons. . In February 2017 he got rejected again. The Refugee Board writes that they believe he has constructed the death threats together with his former friends. Furthermore, they do not believe that he is atheist - but at no time have they asked him about atheism or his point of views.

Fawad fights for the freedom of speech, which has meant that he is now fearing for his life. He has participated in Islamic critical debates and published several articles in the Danish origination for Atheists (Ateistisk Selskab).

On June 22, 2017, the police imprisoned him again, in order to deport him to Afghanistan. Fawad risks the death penalty or execution in Afghanistan for his critical point of views on Islam and the apostasy from Islam. Fawad is loved by many and his Danish family is desperate at the thought of him going to Afghanistan. Please sign, share and help us!