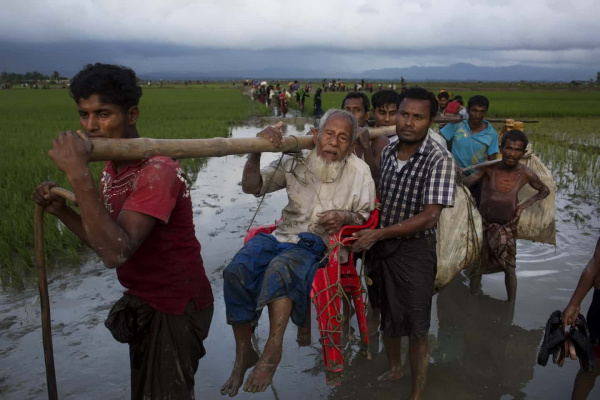 In our legions we publicly condemned the house arrest of Aung San Suu Kyi by the military junta for their inhumane treatment of the pro-democracy leader. Like everyone else we applauded and cheered as she was released, a move which enabled her to become the first State Counsellor and Leader of the National League for Democracy of Myanmar.

Now widely recognized as the de facto leader of Myanmar she has a powerful voice with huge international influence. She was considered - after Nelson Mandela - the most important global symbol of defiance against persecution and tyranny. However, that heroic image has now been tarnished because of her initial silence and subsequent denial of the persecution of the Rohingya Muslim minority since coming to power.

Her legendary and inspiring catchphrase "freedom from fear" now sounds hollow, especially in the events of the last few weeks which leads many of us to believe there is a genocide of the Rohingya people unfolding in full view of Suu Kyi and the onlooking world. For some bizarre reason she refuses to acknowledge the ethnic cleansing of Rohingya Muslims even when eye witnesses and news footage show that tens of thousands are being burned from their homes amid widespread reports of killing and sexual violence. About 290,000 Rohingya have fled Rakhine state and sought shelter in neighbouring Bangladesh.

Sadly, this is not the first time Suu Kyi has ignored the plight of the Rohingya; five years ago she appeared oblivious to a brutal campaign that displaced more than 100,000. It is with great sadness and regret we call for the stripping of her Nobel peace laureate title and other freedom titles given to her by the international community for it is clear her continued silence gives political shelter to the genocidal Myanmar military.

She has often said she is committed to universal human rights however it is abundantly clear now that she does not believe the same rights should be shared by the beleaguered Rohingya Muslims in this Buddhist majority country. On that basis her title as Nobel Peace laureate is meaningless and devalues the whole process of the peace prize. She should be stripped of it with immediate effect.

In addition we call on the UN and the rest of the international community to seriously consider imposing sanctions on Myanmar until the military and all political leaders, including Suu Kyi, acknowledge the genocide of the Rohingya people and start to propose ways of restoring, reconciling and apologising to this persecuted minority which has a history in Myanmar stretching back to the 16th century.