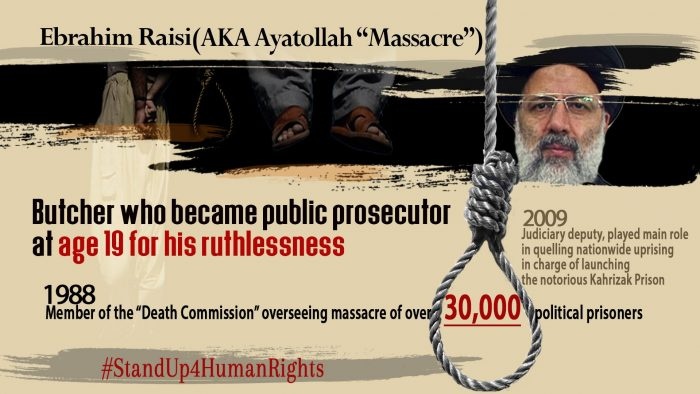 Deny US Visa to Ebrahim Raisi

560 people have signed this petition. Add your name now!

The 77th session of the UN General Assembly (UNGA 77) will open on Tuesday, 13 September 2022. In this assembly, Ebrahim Raisi the president of the clerical regime ruling Iran is expected to address world leaders. We, the Iranian-American scientists, academics, and professionals, echo the cry of our families and our colleagues in Iran, to ask for your administration’s strong and immediate actions to reflect that Raisi does not represent the people of Iran and therefore must be denied entry visa to the United States.

For over a century, the people of Iran have struggled for freedom from the tyranny of the Shah and the mullahs currently ruling in Iran. We ask that you stand with the people of Iran in their demands for peace, freedom and a non-nuclear, secular Republic Iran. In your address to the UNGA, we trust that you will highlight the views reflected by a large bi-partisan voice in U.S. Congress, U.N. experts, and the Amnesty International, and above all by the people of Iran that Ebrahim Raisi should stand trial before international tribunals for crimes against humanity and genocide. He played a key role in the 1988 massacre of as many as 30,000 political prisoners in Iran, a majority of them MEK members.

The planned September 21, 2022 demonstration calling for the prosecution of Ebrahim Raisi organized by the Iranian-Americans across from the UN building to coincide with Raisi’s speech, is expected to be the largest ever of such protests over the years.

As Iranian-American scientists, academics, and professionals who are deeply concerned about the suffering of the Iranian people under the brutal governing regime in Iran, we ask that you stand with us and deny entry visas to the United States for Iranian regime’s President Ebrahim Raisi and his delegation to attend the United Nations General Assembly’s 77th session in New York this September.

NOTE: This Open letter and all its signatories will be published in media.