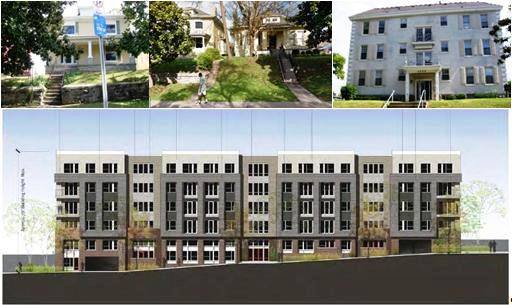 Local developers have requested the Metro Nashville Planning Commission approve a Specific Plan rezoning request (2015SP-007-001) for construction of the proposed 16th Avenue Apartments on Music Row at a Public Hearing on February 12. The new 6-story mixed-use apartment building would contain 135-units, 2 levels of underground parking, commercial space, and a swimming pool. Current zoning allows for 19 dwelling units; the requested SP rezoning would allow for 135 units. The project would require demolition of three historic buildings, including:

Dallas Villines House/Kelso Herston Enterprises, 1202 16th Ave S, built around 1915 by Dallas M. Villines (1885-1921), an art store merchant in the Arcade. His widow, Francis, continued to live here for many years. From 1970-2014, this house was owned by Kelso Herston, president of United Artists Records from 1963-1967 and Capitol Records from 1967-1972. A native of Florence, Alabama, and influential leader on Music Row since the 1960s, Kelson Herston was inducted into the Alabama Music Hall of Fame in 1997. He is recognized as a producer, guitarist, bassist, and songwriter for artists such as Loretta Lynn, Merle Travis, George Jones, Dolly Parton, and Johnny and June Carter Cash. Kelso is perhaps best known for writing popular commercial jingles for Kelso Herston Enterprises, which he operated in this building for over 30 years. From 2010 until a few weeks ago, the building housed a music recording studio called 16th Edge Studios, whose clients included Chris Carmack of the TV show "Nashville."

Historic Nashville believes that the 16th Avenue Apartments would have an adverse impact to the integrity of the historic neighborhood, including adjacent Edgehill Village. We believe that these 100 year old buildings are Worthy of Preservation due to their historic association with Music Row. More importantly, the project is contrary to the designation of Music Row as a National Treasure. Considering the large number of demolitions of historic Music Row landmarks in recent months, the project would have also have a negative impact on local tourism and Nashville's international reputation as the Music City.

For over a century, these historic buildings have been home to artists, merchants, engineers, scholars, musicians, songwriters, and other professionals that have shaped Nashville's unique identity as the Music City. We urge city leaders to encourage the preservation of these important landmarks, instead of approving a redevelopment project that would require their demolition. Therefore, we request that the Metro Planning Commission deny the SP rezoning request (2015SP-007-001) for the 16th Avenue Apartments.