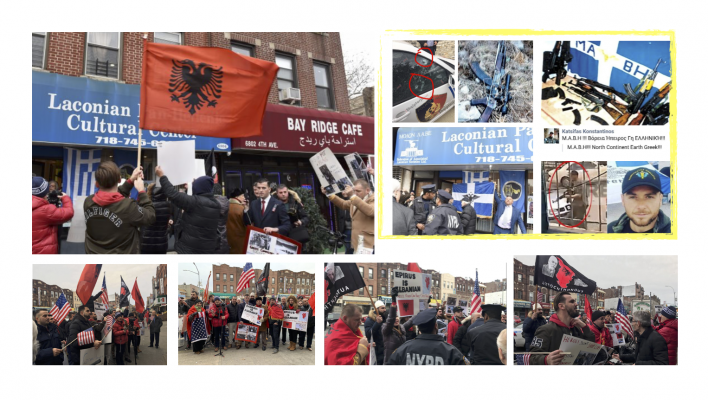 Please sign this petition as we call on Attorney General of NYS Tish James to investigate the office of Assemblywoman Aravella Simotas for issuing a proclamation to a terrorist and furthermore investigate US Non profit organization the Federation of Associated Laconian Societies, for hosting an event honoring terrorist Konstantinos Katsifas!

PROOF OF THE HONORING OF A TERRORIST BY GREEK NEO NAZI SUPPORTERS!

Below is the press release issued on January 30.2019

New Yorkers Launch Campaign Calling on Assemblywoman Aravella Simotas to Resend Her Support of Terrorist and Commit to Rejecting the Rise of Hate, Far-Right Groups!

Katsifas, who openly supported the radical right-wing political group, Golden Dawn, was killed as he opened fire on Albanian police officers as they were attempting to bring him in for questioning. Katsifas, who has a criminal record, was also convicted of drug trafficking in Athens in 2009.

Despite Katsifas’ ties to terrorism and drug trafficking, Assemblywoman Simotas authored an official proclamation in which she cited him as a “dynamic individual” and expressed ‘gratitude for his service.”

In response, Sali Bollati, a Çam Albanian and a genocide survivor of the greek government said, “I appreciate that the Assemblywoman is under tremendous pressure to support a Greek national but this is a slap in the face of what is right and moral. He was not a martyr or a freedom fighter. Katsifas was a terrorist. In America we don’t celebrate terrorists – especially not with official government proclamations. It’s just wrong.”

So far, Simotas has refused to say why she is committed to standing by Katsifas even in the face of overwhelming evidence of past crimes and support of Greece’s far right nationalist movement.

Earlier this year, a group of concerned New Yorkers protested outside of the Federation of Associated Laconian Societies luncheon celebrating Katsifas where Simotas’ proclamation took center stage. During the peaceful protest, demonstrators were harassed with anti-Albanian slurs and nazi salutes.

The group plans to launch additional protests outside of both Assemblywoman Simotas’ and Nicole Malliotakis’ office in the weeks ahead to encourage them to do the right thing.