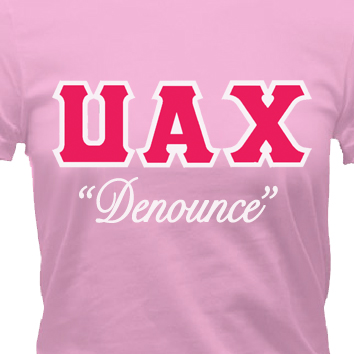 *Signing: We appreciate signatures from anyone in support of #DenounceUAX. For those members of a Greek Organization, please comment with your signature:

"I am a (Fraternity/Sorority Organization) and I #DenounceUAX"

We believe the National Panhellenic Conference (NPC) Unanimous Agreement X (UAX) is a violation of the First Amendment Freedom of Speech and further empowers Universities to sexually discriminate and harass NPC women.

2. A new policy in agreement with the following statements:

A. Allowing "Greek" men and women to support each other’s recruitment efforts in a manner becoming of the ideals and virtues upon which their organizations were founded.

B. Allowing Sweethearts to proudly support an organization of their choice and display the Greek letters in a tasteful and professional manner.

C. Allowing the Sweetheart to be displayed on a Fraternity or Sorority composite, without restriction.

When joining a nationally recognized fraternal organization, a collegiate woman instantly becomes associated with 3 groups: her individual organization, her campus fraternity and sorority community, and the National Panhellenic Conference (NPC). As stated on the NPC website: “The National Panhellenic Conference provides support and guidance for its 26 member inter/national sororities/women's fraternities and serves as the national voice on contemporary issues of sorority life.” They believe “Fraternity is a social experience based on the fundamental right of free people to form voluntary associations. It is one of the enrichments of college life.” NPC also advocates that fraternities exist because they “provide a good democratic social experience; give value beyond college years; create, through their ideals, an ever-widening circle of service beyond the membership; develop the individual's potential through leadership opportunities and group effort; and fill the need of belonging.”

There are several male fraternities that choose to elect a chapter Sweetheart, and even some an International Sweetheart. While not being a member herself, the Sweetheart embodies the outward ideals that the fraternity represents. Like any elected position, being named a fraternity Sweetheart is an immense honor because it means that out of all of the women that are a part of the men's lives, the Sweetheart is the best outward representation of their Fraternity. During her tenure, a Sweetheart serves as an ambassador to the organization and is a liaison between the fraternal community and non-fraternal community. She has the ability to better communicate with the non-fraternal community because she herself is a non-member and knows who the members are as people and what they represent. Often times it is difficult to express how you feel about your organization to a non-member because it is hard to remember how you felt when you were on the outside looking in; a Sweetheart is the perfect ambassador for these scenarios. It is so perfect, in fact, that many female fraternities elect a chapter Sweetheart and he can then serve as a liaison to the non-fraternal community! It is a wonderful thing to have these ambassadors because the more support and strength there is within the fraternity and sorority community on a collegiate campus, the more exuberance there is within each individual member! But this extends way beyond collegiate years for when a women marries a fraternity man, she becomes HIS Sweetheart; for when a father holds his daughter in his arms, she becomes HIS Sweetheart; and for when a son becomes a man, his mother ... HIS sweetheart was there helping him to do so! Sweethearts exist in all shapes and forms and need not be a collegiate student! She is simply an outward representation of the man that she loves or organization that she fell in love with! Their ideals are within her and when given the honor of being called Sweetheart, the men are saying to the world, “Look at this strong-willed, beautiful person! She is a great leader and even better person, and she represents all that we are and hope to be!” It is not a member status, but simply a non-fraternal way to express who they are to the non-fraternal world.

Recruitment for any organization (fraternal or non-fraternal) is 365 days a year. A member's behaviors and actions directly affect the ability to recruit members from the day he or she becomes a member. It is not just the designated week or month advertised on a college campus, it is all day long for every day of every year. UAX is specifically targeting women who are Sweethearts, whether through college recognition or through family affiliation, by not allowing them the right of freedom of speech to promote a specific organization in any forum she chooses. It bars anyone from mothers and daughters to best friends and wives! It is a hateful, discriminatory, and oppressive policy that although still allows a women to be a Sweetheart, has demoted her to being solely an object of affection and pretty picture on a wall (although that picture must be covered up during recruitment). Rather than being able to serve as a leader and ambassador, Sweetheart is now simply just a title. And while NPC believes in the “fundamental right of free people” and seeks women to “create, through their ideals, an ever-widening circle of service beyond the membership”, it directly impacts and hurts the women who the outside community deemed as leaders beyond their membership!

We ask that you help us to #DenounceUAX and give women back their fundamental rights! We deserve to have our freedom of speech and ability to speak on behalf of an organization. Let the grandmothers, mothers, daughters, and wives who happen to be NPC members, have the ABILITY and RIGHT to support the organization that her grandson, son, father, or husband may be a part of! Please help us change this hateful, discriminatory, and oppressive policy that NPC has implemented for if it doesn't, over the course of many years, strong women and leaders will be taught that they must not speak their mind or support what they choose to! Please help use change this oppression. We cannot stand for the “support and guidance” provided by NPC to be so harmful. #DenounceUAX #SweetheartsUnite