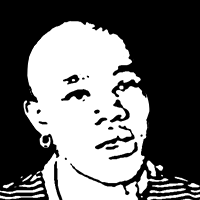 Station Commander Petros Shilane
Tsakane Police Station
Kobus van der Westhuizen
Brakpan Cluster Command
South African Police
Dear Commander Shilane,
I am deeply concerned about the violence facing lesbian, gay, bisexual, transgender and intersex (LGBTI) people in South Africa. In 2012 alone, at least seven LGBTI individuals were murdered in four different provinces.
These are not merely numbers however - behind the statistics are faces and stories of individual South Africans. I want to draw your attention to the particular story of Noxolo Nogwaza, a 24 year old South African Lesbian who was raped and murdered on 24 April 2011 (police case number 635/04/2011). I am disturbed that, two years after her death, no progress has been made in investigating her murder and Noxolo's killer(s) have not been arrested or brought to justice.
This situation of impunity not only sharpens the pain felt by Noxolo's family and friends, but also places other LGBTI individuals and defenders at risk. The lack of access to justice on the ground helps foster a climate of harassment, discrimination and hate-motivated violence on the basis of real or perceived sexual orientation or gender identity. As such, I ask you to ensure that police authorities give their full attention to thoroughly investigating Noxolo Nogwaza's murder so that those found to be responsible may be brought to justice without further delay. I also call on you to publicly condemn targeted violence against LGBTI individuals in the strongest possible terms.
While I congratulate the positive steps the South African Police Service has already taken to respond to hate crimes against LGBTI individuals and to seek solutions to sexual and gender based violence, I respectfully remind you that there is much to be done and urge you to continue this work. Specifically, I ask that you allocate greater resources to training all police personnel regarding their legal obligations to provide non-discriminatory and professional services to LGBTI individuals. I also ask you to ensure that dedicated officers are trained to properly prevent and investigate in an efficient and unbiased manner incidents of targeted violence, harassment and abuse on the grounds of sexual orientation, gender identity or gender expression.
Thank you in advance for your attention. I look forward to hearing from you regarding the advancement and protection of LGBTI rights.

Amnesty International at the University of Florida (UFAI)