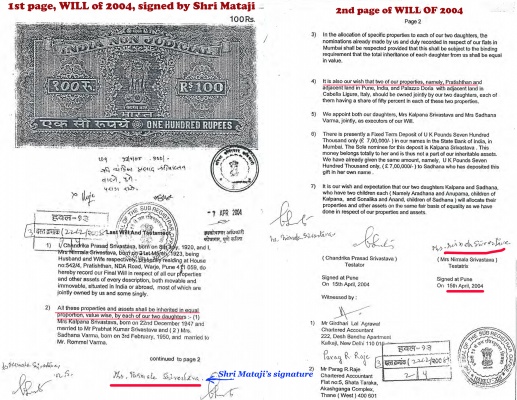 ...“It has to be religious obligation that You must listen to Me, whatever I say. Actually you must obey Me. My hand obeys Me, My fingers obey Me, My feet obey Me; what about you, who are raised to the great dignity and the great position of being the yogis in the body of the Adi Shakti, and they are acting as cells in My body?... May 3rd, 1987

Here are the Three demands of all Sahajayogis

It is beyond human capacity to understand and feel the tremendous vibrations flowing from physical body of Shri Mataji.

We, the Sahajayogis from all over the world vision Nirmal Dham to become the only one Pilgrim place for all. To accomplish this, we demand All Sahaja Yoga Organizations worldwide, VND, NIPC, all Sahaja Yoga Trusts and other donation taking websites, etc., to give money to Nirmal Dham every year.

All the collected money belongs to Shri Mataji, first that money should be used for developing Nirmal Dham.

We demand all Sahaja Yoga leaders and organisations to follow and implement 2004 Will of Shri Mataji,

Please click here for all details of Shri Mataji's Will

...I know of people, there was an actress who came to my program and I came in 71 (there are so many people who came to My program) and also Dr Choudari told Me “You’d better get it copyright”. I said “There is no copyright needed for this kind of a thing, is all right!”. And they are using My words, they are using word Kundalini, they are using Maha Yoga, they are using the words like self realisation, everything; but doing nothing about it, just making money. Sorry, what can I do about it? It is for you to decide, it is the actualization which you should ask”...May 31st, 1990

...“when I went to America, people said, you must get a patent on your lectures, Mother. I just smiled at them. I said, what’s the matter? They said, they might use your words and use the same things for their own purpose and may be that they all do a lot of harm to you, I said, no, it’s nice, let them talk about because that’s what has to happen, people have to know about it, what is there to take a patent for it. We don’t take patent for the light of the sun, and the beauty of the stars. That’s meant for everyone”... March 22nd, 1981

Please click here for more talks on NOT to copyright

We demand NIPC/ Nirmala Vidya LLC, to make ownership transfer document public which was signed by Shri Mataji as “Nirmala”. Watch the signing ceremony video below.

...."First you may get two people, then three people. I started with five. So you can imagine how one can go with it. Try first of all with two, three, five and more. You can also advertise afterwards, if you have given Realization to people, say about – you have given Realization to ten people – you can start your own organization, or whatever you may call, and can work it out..

..."So now I am no more available in the sense I’ve done my best and I think I won’t be able to do this again. It is not my old age but I want to give you a complete freedom to spread Sahaja Yoga. You have got it free and you also have to give it to people free – not to charge them"

For more details on Divine laws