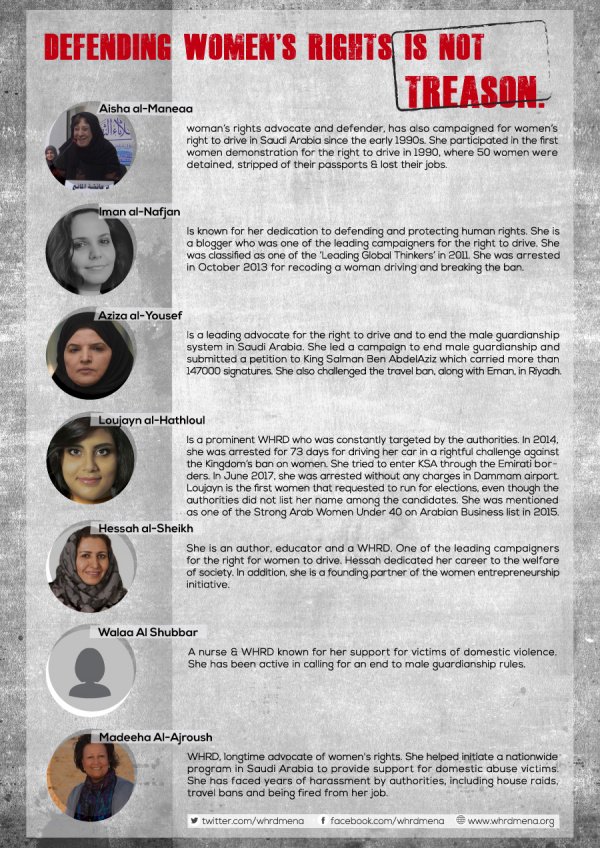 Following the unjustified and outrageous arrest, many Saudi Arabian press reports came to suggest that these WHRDs are traitors and have been arrested because they are “undermining the national unity of the country”. The detained WHRDs are not traitors. They have been peacefully advocating for human rights, pushing forward women’s human rights’ demands, and working for decades for a better life for women in Saudi Arabia and the Arab world. Loujain al-Hathloul is a prominent WHRD who led many campaigns, Iman al-Nafjan is a dedicated WHRD and blogger who was one of the leading campaigners for the right to drive. Aziza al-Yousef is a leading campaigner for the right to drive and to end the male guardianship system in Saudi Arabia. Hessah Al-Sheikh, Madeha Al-Ajroush and Alaa Al-Shubbar have been advocating for women's rights and affirming their rights to exist as WHRDs in the public sphere for the past decade.

Dr. Aisha al-Manea was also among the detained WHRDs. She was released on the 23rd of May. Dr. Aisha has campaigned for women’s right to drive in Saudi Arabia and women’s human rights endlessly since the 90s.

The time has come to say: enough is enough. Promises and pledges of reform from the government of Saudi Arabia must now give way to concrete action. The release of the detained WHRDs, un-doctored and unconditional, would be a crucial first step in the right direction.

Urgent action must be taken.

The Regional Coalition of Women Human Rights Defenders in the MENA asks you to ensure that this action is taken. Add your voice to this petition.

It is time to hold Saudi Arabia accountable. Our signatures will be submitted to demand that:

-The Economic and Social Council of the United Nations (UN) suspends Saudi Arabia’s membership in the UN’s Commission on the Status of Women (CSW). The arrests and prosecution of WHRDs makes it clear that Saudi Arabia has no place in the Commission and that its seat does not comply with the oppression of women and WHRDs.

-The UN’s General Assembly (GA) to suspend Saudi Arabia’s membership in the UN Human Rights Council (HRC). A two-thirds majority of the GA may suspend the membership rights of any HRC member engaged in “gross and systematic violations of human rights.” Detaining WHRDs, accusing them of serious charges without any legal basis and stripping them from their basic human rights in detention--are gross and systematic violations of human rights.

-SRs and WGs publish and issue public statements of support that demand the release of the WHRDs.

Let the WHRDs know that they are not alone – by adding your voice to this petition asking Saudi Arabian Authorities to #ReleaseSaudiWHRDs.

UN EXPERTS RELEASE THE FOLLOWING ON THE 27TH OF JUNE: