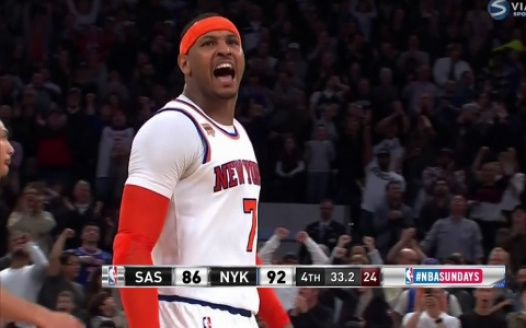 As the world-renowned and popular sport service, ESPN is supposed to deliver to their audience reliable reviews and sport analysis, whether it comes to publishing just results and statistics, or articles presenting journalists' subjective opinions, which, however, should be based on their knowledge, research and analytical skills.
Neither of those can be seen in the recent NBA Top100 ranking, more precisely in the fact that ESPN has managed to find 63 players presumably better than Carmelo Anthony. No serious NBA fan can accept this ranking, considering that the Knicks' leader was unstoppable in offense last season and as in every previous year of his NBA career, averaged over 20 points per game (22.4, 22nd in the league). Also in the last season he made several game-winning shots, and as one of the statistics presented during the game translations by NBA.com has shown, in the last minutes of about 20 games decided by 5 points or less, he averaged more than 2 points with over 50% field goals made. Despite difficult personnel situation he was put through, he remained the leader and the mentor for his teammates as well, which they have pointed out in the press often enough. In no way does he deserve such a low ranking, and this has been also stated by other NBA stars, who have come to the defense of their disrespected colleague.
Moreover, placing Carmelo Anthony below Lonzo Ball who, as perspective and talented as he may seem, has not played a single game in the NBA yet, can be considered nothing but a cheap urge to create controversy and "get clicks". That is a slap in the face not only for such an outstanding athlete that Carmelo Anthony is, but also for the ESPN audience and sports journalism in general.
Hence, the worldwide audience of ESPN and serious fans of the NBA hereby request that the network apologize for this inaccurate and disrespectful ranking.