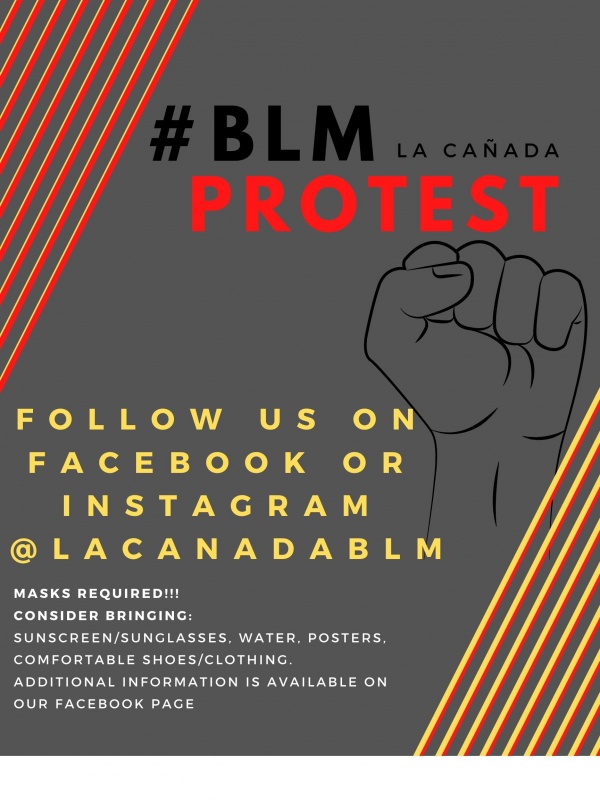 We are writing to ask for your support in creating a better future for our community. We are La Cañada Black Lives Matter (LC-BLM), a group of La Cañada residents dedicated to protecting Black lives in America by creating a just and equal system for all members of society. Law enforcement plays a much different role in the system that we envision. While we are committed to supporting efforts to reimagine public safety on a national scale, we also recognize that small-scale changes need to be made in our own community. For years, our local deputies have failed to recognize or speak out against the systemic racism and violence within their own institution. Their lack of understanding and, at times, callous disregard of the Black Lives Matter movement, as well as their lack of commitment to combating the racial injustices committed by the system suggests that they are not willing or able to protect the Black/POC members of this community. It is not acceptable for Capt. Todd Deeds to express his support for the Black members of the community and perform outreach only in times of national crisis. Thus, in the interest of solving this issue through greater community activism, we demand the following:

While we recognize that building a new system of policing will require years of restructuring, La Cañada is in a unique position to stand up against the injustices committed against the people of Los Angeles by the Los Angeles Sheriff’s Department (LASD). Many residents of La Cañada know it as a safe and quiet town, with a highly awarded school system. While occasional reports of burglaries are often highly publicized in local papers and on social media, these do not indicate a need to contract with a police system that is infamous for abuse and corruption.

Based on data reported by the LASD, since 2010 there have been only three deputy-involved shootings in La Cañada: 2 were deer shootings and 1 was an accidental discharge. (1) Of the LASD’s total Deputy-Involved Shootings outlined in their Incident Summary, ranging from 2010 to the present, 22% are classified as Unintentional Discharge Incidents. (2) Nearly a quarter of the time deputies discharge their weapons, it is accidental.

La Cañada also continues to report low levels of crime with 123.95 Part 1 crimes and 196.66 Part 2 crimes per 10,000 population, compared to 254.15 Part 1 crimes and 338.41 Part 2 crimes per 10,000 population for the Los Angeles Sheriff’s Department as a whole in 2017. (3-4)* While a low level of crime is not a requirement for replacing a police force, it does ease the burden on the new systems that will be created or bolstered to assume the duties of the sheriff.

We believe that the City of La Cañada is fully capable of protecting and serving its citizens in every capacity without a contract with the Los Angeles Sheriff’s Department. While our local station may appear to have a small and peaceful presence in our town, they are an arm of the greater LASD and thus complicit in the department’s corruption and brutality. In a meeting with Capt. Todd Deeds and organizers of LC-BLM, Capt. Deeds stated that he had never seen any instances of racism in the LASD. This comment made it immediately clear that Capt. Deeds is either unable or unwilling to speak out against the corruption within his own department, or is somehow completely clueless about the corrupt nature of his department. The latter possibility would be surprising considering that Capt. Deeds previously worked at the East Los Angeles Station, which has been subject to several lawsuits (including one alleging egregious misconduct filed in September 2019). (5) His failure to recognize any wrongdoing within the LASD serves as yet another indication that our Sheriff’s Department is ill-equipped to facilitate reform.

Based on quarterly reports published by the LASD, there were over 20 instances in which an LASD employee was not discharged after being reported for behavior or inappropriate comments regarding race, sex, or gender in 2019 alone. (6-9) Despite the veneer of transparency, these instances are recorded with broad and vague language, concealing the extent and severity of their behavior from the citizens paying their salaries and obscuring whether or not the listed disciplinary actions truly match said crimes. In all of the aforementioned cases, the LASD employees were recommended to be given punishments ranging from a “Written Reprimand” up to a “30 Day Suspension.” (6-9) The same records report that over 10 LASD employees were reported for driving under the influence and were recommended to continue working for the LASD after brief suspensions.

The records also include a description of one deputy who was recommended to be given a written reprimand after he “provided his phone number and continually requested text message communication from a student worker causing the student worker to become uncomfortable in the workplace.” (6)

Another deputy was also recommended to be given a written reprimand after they “used OC spray [pepper spray] on a waist-chained inmate.” (6)

It was recommended two other deputies be given a written reprimand after they “engaged in a betting “pool” regarding a defendant in a criminal trial.” (7)

Another deputy was recommended to receive a written reprimand after they were “arrested for domestic violence.” (7)

Another deputy was recommended to be given a written reprimand after “not exhibiting good behavior and acting unprofessional by making animal sounds that could be interpreted as racist in nature.” (9)

A sergeant was recommended to be given a written reprimand after they “engaged in unprofessional and inappropriate conduct by using derogatory language towards an inmate and directing personnel to treat the inmate like an animal.” (9)

The FBI has investigated deputies of the LASD on multiple occasions over the years, in one instance culminating in the conviction of former Sheriff Lee Baca for obstructing a federal investigation. (10) Additionally, Paul Tanaka was promoted to undersheriff (Baca’s second in command) despite being a known member of the Vikings, a group of deputies who “have been accused of breeding a gang-like mentality in which deputies falsify police reports, perjure themselves and cover up misconduct.” (11) Further FBI investigations have revealed that deputies have been known to develop their own creeds and use tattoos to identify one another allowing them to organize and operate in a manner similar to gangs. These groups have been known to encourage and reward acts of brutality. (12) This includes reports that one gang of deputies would “earn” their tattoos by breaking the bones of inmates in Men’s Central in Los Angeles. (13) Sheriff Jim McDonnell, elected shortly after the scandal surrounding Lee Baca, attempted to reform the department unsuccessfully. As part of his reform he sought to publish the “Brady List”, which is a list of over 300 deputies known for misconduct including brutality and fabricating evidence. He was blocked from publishing the list after the Sheriff’s union argued successfully that it would hurt the careers of the officers. (14) Sheriff Alex Villanueva has downplayed the existence of these groups by calling them a “cultural norm” and form of hazing. (15)

While the behavior, scandals, and resulting statistics are already gravely concerning, they represent just a fraction of employee misconduct, as the LASD is firmly built on a cultural foundation that strongly discourages the reporting of fellow deputies. In his 2018 campaign, Alex Villanueva promised to form a Truth and Reconciliation Committee for the purpose of righting wrongs done by the sheriff’s department. Instead of reviewing cases of brutality in the department, as he had initially claimed was his intent, he used this committee to rehire a deputy who was fired for allegations of domestic abuse and stalking. (16) The deputy in question was accused of grabbing another deputy by the neck, attempting to break into her home, and sending her harassing text messages. The deputy was rehired by Villanueva after he volunteered on Villanueva’s campaign against McDonnell. (17) Additionally, the disciplinary records of LASD deputies are considered confidential by CA Penal Code § 832.7. (18) As a result, it is nearly impossible to access reports on police misconduct. Even prosecutors are not allowed direct access to such records. (19) The long-standing culture of secrecy and abuse in the LASD has become ingrained into the very laws and systems that are supposed to protect the public.

It is no surprise, then, that an agency which permits the existence of violent police gangs and protects deputies with a history of racist and abusive behavior continues to disproportionately arrest, incarcerate, and murder Black people and other minorities. In Los Angeles County, Black people are imprisoned at 13 times the rate of White people. (20) This is representative of broader injustice fomented by the LASD: not isolated to the brutal murders of Black men on the street, but a systemic problem that contributes to the dehumanization and re-enslavement of Black people.

As is evidenced by these cases of misconduct, and the dozens more like them, the LASD is a deeply corrupt and racially biased institution run by people either ignorant of the active harm it enacts in our community, or those who are complicit in it. It is clear that the system of policing practiced by the LASD is not necessary in La Cañada. By contracting with LASD, our city supports and contributes to a policing system plagued with accounts of corruption, inmate abuse, brutality, and racism.

As members of this community, but more importantly as human beings, we find the Los Angeles Sheriff’s Department entirely unfit to protect and serve. Not only have they failed to enforce public safety, but they have also failed to combat corruption in their own department. Years of reform attempts have failed to address even the most visible forms of corruption within the department. We have not come to the decision to defund the police department in our community without acknowledging the weight & severity of that task. We have listened to promises of reform for years only to see more black people killed and imprisoned by a system incapable of objectively enforcing the law. Thus, while we understand the magnitude of our demand and the unprecedented amount of work that needs to be done to replace the LASD, we also implore you to understand that we are hurting. We are tired of seeing black people murdered by deputies who we pay to protect us. We are tired of our cries for help being ignored. We cannot and will not keep fighting to reform a system that has proven an unwillingness and inability to change. We demand that the City of La Cañada Flintridge terminate its contract with the LASD, and use its authority to release a statement condemning the egregious actions of the Los Angeles Sheriff’s Department.