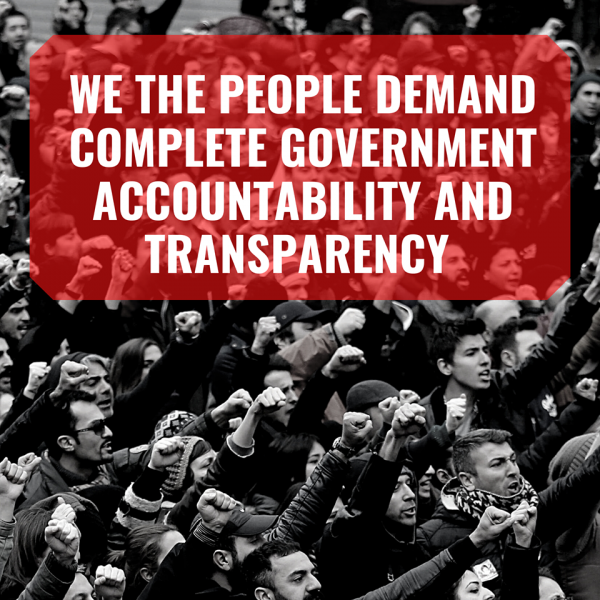 771 people have signed this petition. Add your name now!

To the people of Australia, media outlets and elected representatives throughout the country.

We the people of Australia demand immediate transparency of the state and federal governments. We demand the public tabling of all documents related to the measures put in place during the COVID pandemic, including all peer reviewed scientific data, that have resulted in declaring emergency powers throughout the country.

We the people demand the federal and state governments explain why they have not acted in accordance with the Freedom of Information Act and demonstrated transparency when requested.

We demand to know how the government arrived at the decisions of:

Shutting down much of the economy and costing people their livelihoods.

The degradation of declaring that some people do not provide essential services, when all services to community are essential. All individuals have the undeniable right to provide services to earn a living and provide for themselves and their families.

Quarantining the healthy as a necessary or effective measure.

The path of eliminating a virus in a nation as even achievable or the correct measure.

Waiting for a vaccine that may never come as the correct path of action. With a virus that we are told is constantly mutating.

How can we be assured that rushing a vaccine will be safe when vaccines take 7-8 years of development and testing before arriving at market, and most do not even reach market. Do they expect us all to be human guinea pigs?

Are covid-19 tests accurate, safety tested and approved? An AFL footballer tested negative on either side of his positive tests.

Is social distancing or mask wearing an effective measure?

Why are the total number of positive and active cases constantly reported, yet not the percentages of positives to tested (remaining consistently nationwide at 0.3%)?

Why is the recovery rate as reported by the WHO of 99% never reported? And why are we never told that those who die of covid-19 are in the majority already with a predisposed condition?

Why are armed police and military required to patrol and enforce isolation in Australia - one of the most peaceful nations on Earth?

How did the Victorian government arrive at the conclusion regarding the hard lockdowns of the commission flats of North Melbourne, Kensington and Flemington - where residents were trapped and denied the right to go outside to breathe in fresh air?

Why were we told at the start of this that covid-19 was a once-in-a-100-year event. Yet every day we hear of the "new normal"?

We were told over a 150,000 people in Victoria could die alone. How did the government arrive at these figures? And where is the accountability that they got it so wrong?

We the people of Australia are concerned about what is going on behind closed doors. We know something is not right. We are concerned what precedents are being set. In no time in history has any world government taken such extreme power from its citizens and given it back voluntarily. What are the exit strategies? When will the governments voluntarily hand back their excessive powers?

The government has intruded in our lives like never before. They have interrupted our livelihoods, interfered in our intimate lives. They have forced people to die alone, mourn in small numbers and ignore the devastating effects of the rules they have enforced under an authoritarian rule.

We ask you to consider all these questions and join us in demanding government transparency on all levels now.