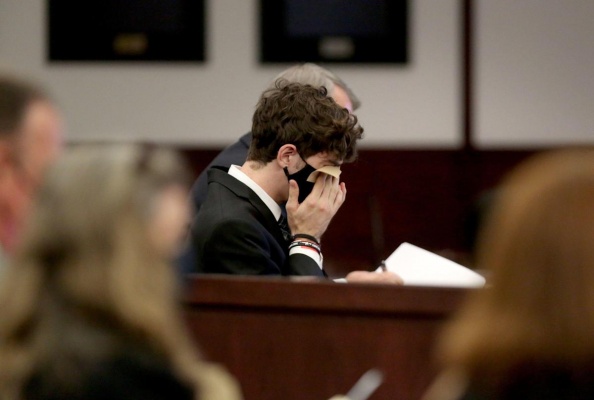 Young Boy Gets 24 Years In Prison For Unavoidable Traffic Accident

On May 23, 2018, an UNAVOIDABLE TRAFFIC ACCIDENT occurred on Bayshore Blvd involving John Barrineau, 17 driver of a Nissan Altima and Cameron Herrin, 18 driver of a Mustang GT 2018 with his brother Tristan as passenger

Cameron had no prior criminal record or traffic violations, including the day of the accident since he obtained his license at 16. In fact, he has been assisting with church work transporting necessities as and when required.

The state has been extremely biased against Cameron since day one based on a racing theory to implicate him on the deaths with 2 charges of Vehicular Homicide.

Racing? The Mustang insurance with "racing" as an exclusion actually made $5million payout to victims family. Note that it was $5m not $500 thousand but $5million.

Later on it was discovered, State needed the racing theory to push for a Racing Bill which cited Cameron's case. The bill passed in early 2019 even before sentencing.

Cameron was sentenced to 2 days for the racing charge and John Barrineau 22 days.

The evidence to prove they were racing was a text exchange at 7am in the morning about Minecraft game on 23 APRIL. Cameron's parents bought the car on 21 APRIL and car was still being processed for registration. Judge for yourself whether they were racing.

Additionally, the victims families accepted $6,4m from both defendants yet demanded full 30 years imprisonment for both boys.

The State failed to prove there was racing to secure VH against both boys, so they offered John a plea deal (6 years prison and 15 years probation) in exchange for lying and testifying against Cameron that they were racing should Cameron maintained his innocence as "not guilty" and goes to trial.

True enough, since John cannot testify that they were racing, Tristan's charges were dropped a month later AFTER Cameron was sentenced to 24 years.

All the evidences used to convict Cameron at the sentencing hearing were contradictory. Black box data, illegally obtained from the Mustang by a detective who had no experience dealing with such data, showed in court the data being badly falsified on a simple graph and excel sheet format.

(b) Time of the accident clocked at 11:42 am based on the "infallibility" of the black box data extracted but a CCTV video in court showed two cars heading in the opposite direction at 11:44 am.

This contradiction by default lends doubtful integrity as to the supposedly 102mph extracted from the black box.

Detective affirmed in court that the Mustang speed was 40-35mph AT IMPACT, which was well within the Boulevard speed limit of 40mph.

Too many contradictions in evidences. Highway footage was surpressed.

Comments from locals back in 2018 all stated she wasn't crossing legally.

The spot she actually crossed from was superimposed by immediate media manipulation by victims family through "loud" memorial gathering at a different spot known as "unmarked crosswalk" within 2 days from accident date. Live stream coverage showed police activities on the accident day AFTER the "unmarked crosswalk" where repetitive memorial gathering carried out every year to make it right as a manipulated memory imprint of the young mother jaywalking from the wrong spot.

Yes there are young fans and there are also professionals with medical care, insurance, paralegal backgrounds, parents and mothers just like Jessica who are staunch Supporters of the injustice this young man is subjected to. Law is equal to all. And it's horrific to think she actually tempted fate trying to cross with her child on a busy traffic like Bayshore Boulevard, Tampa.

Please sign the petition for a serious reconsideration of his case as this could be a wrongful conviction of an educated, well brought up individual who is also an honors student. Cameron actually completed college whilst under house arrest with a GPS tagged to his ankle the two years waiting for trial during the pandemic.

Even a retired ex-Judge of the 13th Court District testified under oath to his character as being a respectful and kind person.