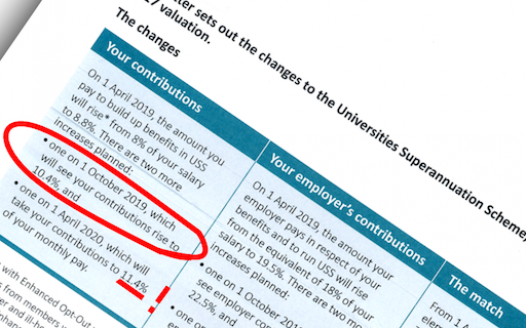 Defend USS, Not a Penny More from October, #NoDetriment, Restart the Dispute

Defend USS, Not a Penny More from October, #NoDetriment, Restart the Dispute

We, the undersigned, call on Universities UK not to impose additional USS contributions on scheme members from 1 October 2019. Members were notified by letter in March of a 10% increase in contributions from April 1st - despite the USS member consultation showing overwhelming support for the proposals of the Joint Expert Panel (JEP) to balance the scheme, and no support for paying more into it.

Secondly, we call on UCU to restart the USS dispute, and ballot members for industrial action if UUK make additional deductions from salary from 1 October. USS have told members this could take total contributions to 10.4% (a total 30% increase over the current 8%), with a further increase to 11.4% (a total 42.5% increase) in April 2020. If any increases are imposed on the scheme, they should be paid for by the employers. We should insist on #NoDetriment, where members’ contributions are brought back to 8%.

We are being shortchanged. For most of the lifetime of USS, members paid 7.5% for a Final Salary scheme. The case for additional payments has been blown apart by mathematicians, statisticians and actuaries.

We pledge to build the biggest possible turnout in an industrial action ballot to restart the USS dispute, should this prove necessary.