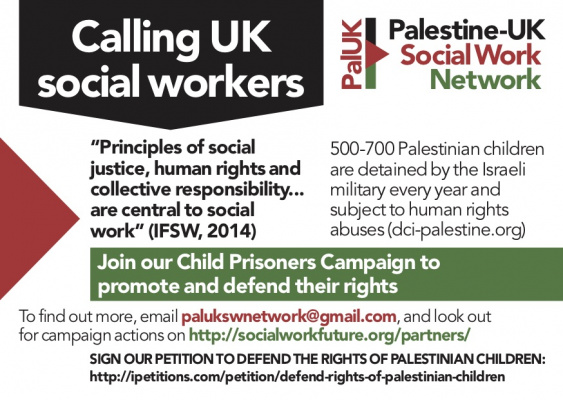 Defend the rights of Palestinian children in Israeli military detention

As these values and principles pertain to all people, and we are an international profession, we have a duty to speak out in respect of Palestinian children who are suffering abuse and the denial of their rights.

500-700 Palestinian children, some as young as 12, are detained by the Israeli military each year. The abuse they experience has been documented by Defense for Children International (dci-palestine.org), in the UNICEF report, Children in Israeli Military Detention: Observations and Recommendations, and in Children in Military Custody by a delegation of British lawyers.

We invite the Israeli Union of Social Workers to use their influence on behalf of Palestinian children, and to join us in calling on the Israeli Government to implement in full the recommendations of No Way To Treat A Child (DCI, 2016), including that all interrogations must be audio-visually recorded and that children must: