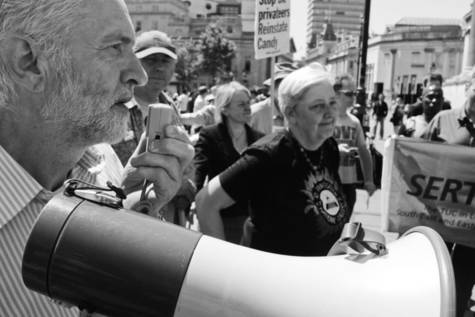 Defend Corbyn's anti-austerity policies and his mandate to lead Labour

Unite the Resistance 0 Comments
3567 signers. Almost there! Add your voice!
90%

The overwhelming election of Jeremy Corbyn as leader of the Labour Party is a hugely welcome development for everyone who opposes austerity, racism and war.

The thousands who packed into halls across Britain to hear Jeremy are clearly looking for a new kind of politics that breaks with the pro-austerity consensus. Some were established activists but many were young people from a generation that have faced the assault on EMA, spiralling tuition fees and the rise of zero hours contracts.

They have been inspired by the campaign’s message. After years where the Labour leadership often aped Tory policies the party now has a leader who is a socialist with a proven track record of standing in solidarity with those fighting against injustice and for peace.

His first act on being elected was to join the demonstration in support of refugees in London and to speak out in defence of the trade union movement and against the Tory Trade Union Bill.

He won in an election where over 400,000 voted and he won almost 60 percent of the vote. This gives him a clear democratic mandate to carry out the polices that he put forward during the leadership contest.

Any attempt by the media, or politicians from either inside or outside Labour Party to undermine Jeremy Corbyn and the policies he represents flies in the face of what is clearly an overwhelming democratic mandate.

Jeremy Corbyn’s victory has already sent shock waves through an establishment that for years has had the luxury of a political leadership on both sides of the House of Commons prepared to back austerity.

In Corbyn they see someone who stands for resistance to year after year of privatisation, cuts, and war. In short – policies that make the 99 percent pay for a crisis created by the 1 percent.

We call on all those both inside and outside the Labour Party who support the pro-union, anti-austerity, anti-racist and anti-war policies that Jeremy Corbyn has put forward to stand up to any attempts to undermine his democratic right to lead the Labour Party and the programme he has supported.