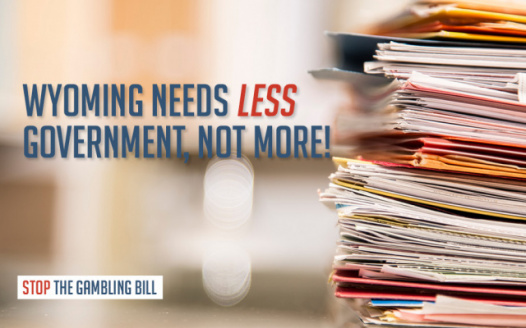 During the 2019 legislative session, we were pleased that the Wyoming legislature defeated a bill in the Senate to create a new Gaming Commission that would regulate gambling statewide (bingo, pull-tabs, calcutta events, and video slot machines) as well as a companion House bill specifically focused on regulating the expansion of video slot machines to truck stops, liquor and convenience stores, bars, restaurants, and nightclubs around the state. The Senate bill died in committee on a 1-4 vote, while the House bill was defeated 17-42 on the floor.

However, even in the face of these resounding defeats, the supporters of expanding government to legalize, tax, inspect, enforce, and regulate new gaming activities around the state are back at it again! During the 2019 Interim period, the Travel, Recreation, and Wildlife (TRW) committee has placed Gaming Regulation on their agenda as the #1 topic of investigation! The TRW committee has scheduled three separate hearings in various locations around the state during 2019 to take testimony and explore ways to reincarnate their failed 2019 effort. Their stated intent is to produce a new version of the failed 2019 legislation to be considered during the 2020 Budget Session in January and February.

We believe the current gaming environment is appropriate for Wyoming and is regulated at an appropriate level of governmental involvement to ensure the safety and rights of the citizens of our great state. We are opposed to new legislation that will introduce additional regulation, restrict gambling further, or expand it. The legislature’s 2019 decision was proper and correct.

Very simply, we support the status quo and encourage legislators to respect the 2019 vote and reject consideration of any gaming commission bill during the 2020 Budget Session, and to vote NO if the bill does come up for consideration.