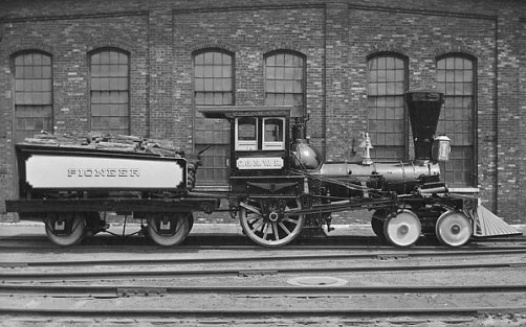 On November 20th, 1848 the diminutive locomotive "Pioneer" carried a train of dignitaries to a location 10 miles west of the city, returning with a load of grain sacks. This first revenue train to operate in Chicago would rapidly lead to the construction of hundreds of miles of tracks crisscrossing the city. The railroads would become a major factor in the growth of the city and its influence in nation's commercial life and social landscape. The railroads would erect 6 great stations in downtown, temples of transportation designed to efficiently handle thousands of daily passengers and inspire awe in those who passed through them. The suburbs burgeoned thanks to a robust system of commuter trains that made the rush hour a daily part of the city's rhythm. Freight trains departed and arrived with raw materials and the goods manufactured by the many factories and businesses that called the city home. Poet Carl Sandburg saw this and eloquently summed up the city in the immortal phrase "Hog Butcher, Tool Maker, Stacker of Wheat, Player with Railroads and Freight Handler to the Nation".

In 1948 the 100th anniversary of the Pioneer's inaugural journey was celebrated by a great Railroad Fair that brought many of the nation's railroads to a location on the city's lakefront. There were exhibitions of trains and equipment, historic exhibits and a daily theatrical extravaganza all open to the public. Since that time the fortunes of America's railroads have waxed and waned with the changing economy. Most of Chicago's great downtown railroad terminals fell victim to the wrecker's ball. Tracks were removed as industries vanished. Yet the city is still a robust railroad town and remains the focal point of the nation's rail network. Freight trains still ply the tracks, commuter trains carry people to and from work or the many city's attractions, Amtrak operates the nation's passenger trains from their hub in Union Station. Railroads continue to play a vital role in the economic health of the city.

Sadly Chicago and Chicagoans have forgotten what the railroads mean to the city and region. There have been no civic celebrations of the railroads since that grand event in 1948. This petition seeks to rectify that collective amnesia by asking that the Chicago City Council declare a "Chicago Railroad History Month". It is hoped that this recognition would spur civic and private events focused on both the rich history of the role railroad's played in Chicago's, and their continuing role in the city's future.