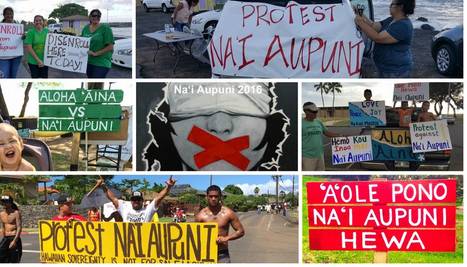 We, the undersigned, firmly reject the illegitimate Naʻi Aupuni ‘Aha objective to create a Native Hawaiian government. We stand in opposition to any governing documents and governing body that is produced through this ‘aha. We continue to stand for the unification of our people through a transparent process, free from any state or federal interference, control, or prescribed destiny.

The ʻAha 2016 stems from a top down approach in which all of the terms: the use of Hawaiian trust monies; participation; timeline; representation; the convention, and outcomes have been determined by a small number of people, including former Governor Abercrombie; the State legislature; the Governor-appointed Kanaʻiolowalu commissioners; the OHA Board of Trustees; the OHA-selected Naʻi Aupuni Board; and approximately 150 self-appointed ‘aha participants. Each of these parties is complicit in driving an agenda that has divided our people more than ever.

In addition to this deeply flawed process, the 150 individuals who have not been elected or vetted have nevertheless decided to produce governing documents that will attempt to create a governing body on behalf of the Hawaiian nation in a private meeting. This approach violates the most basic principles of self-determination, upholds the status quo, and must be rejected.

The undersigned demand that the ‘Aha 2016 cease and desist from continuing to produce any governing documents. We stand in opposition to any attempt by individuals or organizations selected and sponsored by the State of Hawaiʻi to speak for the Hawaiian nation or to determine our future.

We support an open and transparent process that is based on education, consultation, consent and unity. We call upon the 'Aha participants to join us in demanding nothing less than an initiative envisioned and designed by the lāhui, open to all kānaka who wish to participate, free from conditions that we had no part in creating. Such a process should include an appropriate time frame for such an important task; it should be open; and it should be free of any State of Hawaiʻi interference, control or prescribed destiny.