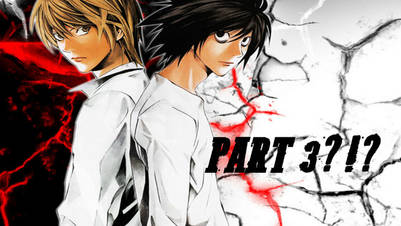 Imagine if there was a huge support base for wanting a Part 3 Death Note by the fanbase!! Don't deny the fact that you'd love to see an anime continuation to the Death Note series ;) If you agree with this statement please read below, sign this online petition and share it on social media as you never know, the chances of this occurring might actually happen one day!

Look I've been a fan of Death Note for years now but I was always put off by its ending. More so with the anime ending compared to the manga's ending. But overall for both, the way Light lost to Near from Mikami's mistake of leaving the Death Note in a "bank" lol seemed to simple as 1): it was established in the series that Mikami was intelligent clearly, 2:) why wouldn't Mikami rip some pages out of the death note and keep it on him as insurance?, as well as 3): Light would of told Mikami to do this just to be safe.

But I'm not asking for a re-write of the ending for the series to its anime or manga. Especially since Ohba and Obata are pretty busy with their new manga series Platinum End. When I saw Dragon Ball get a new series and Naruto as well, it just makes me wonder imagine if Death Note received a part 3 (when I say part 3 I mean third overall arc of the series) anime and then imagine if it was done right. There might be a bit of a "canon" debate, but if mangaka duo wrote the plot, drew character designs and supervised its production with Madhouse, honestly I reckon it could work. If this occurred and done properly, I don't see people complaining too much about a "canon" issue if both mangaka are supervising every step directly and It wouldn't be something lackluster like Dragon Ball Super and a new part 3 could potentially improve the series overall.

All I'm considering as an continuation of the story as an anime as the series is still extremely popular, has a huge fanbase which would certainly make profit for new DVD's, blu ray's, figures, merchandise etc. So I have a couple of ideas for a part 3 anime.....

1): Light Yagami returns to the human world and plots his revenge against Near and company. Now, how could this be done since Light died by Ryuk writing his name in his Death Note? If they introduced the Death Note Eraser from the pilot chapter, Ryuk could potentially want to have some fun again (lets say he got bored in the Shinigami world for too long) and wants to have his old partner in crime back, Light! All Ryuk would have to do is erase Light's name in his death note which would result in Light becoming alive again. I personally would be keen to see a story like this occur and I think many fans would love to see the Light and Ryuk back together again.

This is just a couple of suggestion ideas as obviously there is many more ways a part 3 can be created. Obviously this is a huge stretch for a part 3 to occur in the future but why not just put this one there, try and get some attention to it because you never know maybe one day we could have this amaszing series continue again.