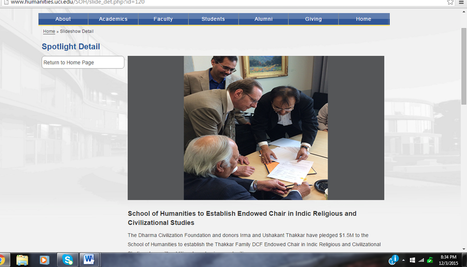 STUDENT PETITION ON THE DCF AT UCI

At the UCI Humanities Executive Council town hall meeting on December 1, 2015, a couple of alarming issues were brought up regarding the new chairs in South Asian studies that are being instituted. They are being funded by the Dharma Civilization Foundation (UCI Humanities has received/will receive 8 million dollars +), an organization that has ties to right wing Hindu nationalist groups in India. Their agenda is to "create an academic and intellectual infrastructure for the systematic study of 'Dharma', 'Sanatana Dharma', 'Hindu Studies' and 'Indic Civilizational Studies'" and to "free" it from the "rubric of South Asian studies." They have attempted to intimidate the "personal circles" of professors at UCI and to influence the selection of candidates. Moreover, none of the existing South-Asianists at UCI were consulted.

We, the undersigned, are concerned about the proposed donation by the Dharma Civilization Foundation (DCF) to the School of Humanities for the creation of endowed chairs, in light of the issues that arose at the HEC Town Hall Meeting on December 1, 2015.