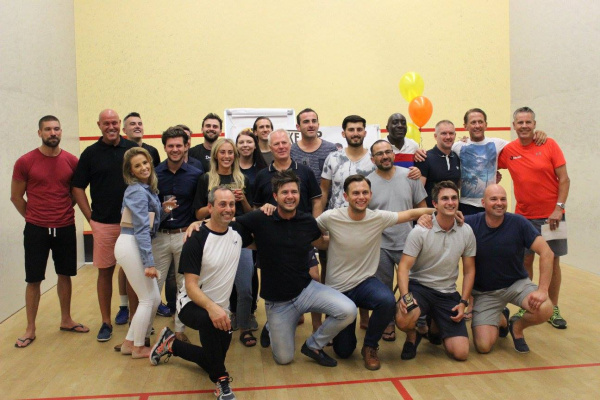 David Lloyd Gidea Park, Essex, are due to commence work this September that will convert two of the three existing squash courts into a studio for their latest fad, the Blaze "innovation". The decision to proceed with the scheduled works was taken without consultation with club members despite the club's squash scene now flourishing under the leadership of Ex-England junior and Head Coach, Niall Engerer, from April 2017.

The loss of two of the three squash courts ultimately results in competitive squash no longer being viable at the club, leaving nowhere for members of the community to play in the catchment. The existing courts are already used to full capacity with a 10 session training programme in place each week, 3 active mens teams in the Essex league as well as 30 competition dates held at the club each season for all of it's members. The loss of two thirds of the facility will result in insufficient capacity for competitive squash to continue in any realistic shape or form at the club.

70 of the 200 squash-playing members at the club have been members of David Lloyd since it opened it's doors in 2006, having transferred from local squash club, Romford YMCA, following the closure of three of their courts being replaced by a climbing wall and spin studios - both proving unsuccessful. The loyalty of such members has not been recognised by involving them in discussion or negotiation is testimony to the contempt with which David Lloyd appears to hold their loyal subscribers.

Whether you are a squash player or not, please take a moment to show your support by signing this petition to seek the survival of a sport that brings so much to so many in the Havering area in hope that a more suitable alternative of space can be found at the club. The proposal for the squash courts is both non-sensical and disrespectful to members who have supported the club for over a decade at a time when squash is seeing record activity from over 200 members. Please support your fellow members and urge David Lloyd to reconsider the current proposal by signing the petition now.

It takes 10,000 signatures to spark a response from government, how many will it take the powers that be at David Lloyd?