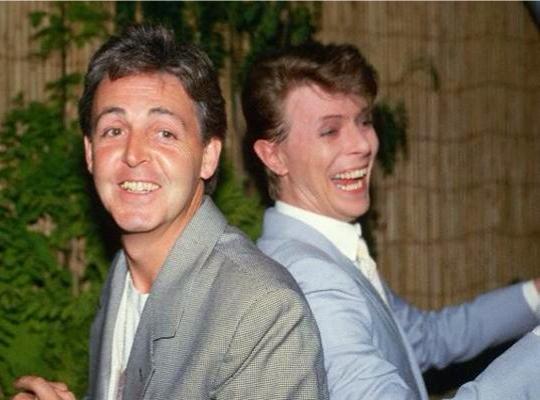 They need no introduction.
They're two of the most influential artists alive and have just about done it all at one point or another, changing the equation of popular culture forever in the process.
They've each experimented in numerous areas and collaborated with several artists, many of them mutual friends. Yet, in spite of all this, they have somehow never collaborated in the studio with each other.We've had enough, but we won't let it bring us down. Indeed, appalling as it is, we believe its time to put an end to this nonsense and DEMAND a collaboration.
Why, you ask? Why not. A Beatle and an alien are incapable of producing something that's not worth while - unless they wanted to, which would be cruel and rude.
Truth be told, music needs them and, frankly, it's getting embarrassing. So that's why some of their most die-hard fans have decided to embark on this humble mission to facilitate a sonic salvation and show them both just how much we want it. It's a Movement for Sound - a Campaign for Art. All aboard!
Although it's way too soon to see, thanks to you it's getting closer. In fact, if we can sparkle, it may land tonight- or, we're hoping, by 2018. Either way, we would be amazed to bring them together for one magical moment, even if it's just for one day. Of course, there's no guarantee,butwe've gotnothing to lose.
So come one, come all, and spread this historic petition far and wide to help the stars align behind this hope for the future. Join us on Facebook and Twitter -Let's get this show on the road!
www.Facebook.com/BowieMcCartney
www.Twitter.com/BowCartney
Then, when it's all said, sung, and done, the answer to the title of this petition will be: David Bowie + Paul McCartney =YOU