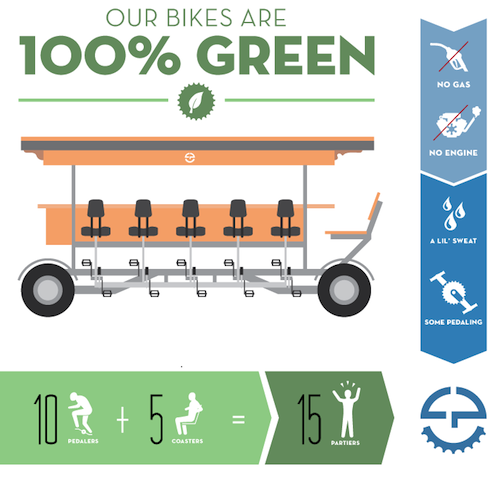 Please allow Cycle Party to roll on the streets of Fort Lauderdale! I have been on the quadracycle and consider it a safe and fun addition to Fort Lauderdale's attractions!

CYCLE PARTY IS GREEN: A progressive city deserves a "green" alternative to limousines and buses. It is a fun way for a group to exercise outdoors together while touring the city in a manner that is safe, healthy, non-polluting and environmentally sound. Cycle Party promotes bicycling by creating awareness to alternative transportation.

CYCLE PARTY IS SAFE: Traveling in a group on the quadracycle is safe alternative to driving a car, between events or establishments.

Routes are proposed in the Himmarshee, Las Olas and Fort Lauderdale Beach districts. The routes will be in compliance with Fort Lauderdales ordinances and will minimize interference with automobile traffic.

Cycle Party shares the road as a bicycle but will pull over to let faster traffic pass. A trained company driver always steers the bike and has complete control of the brakes, lights and direction signals. The hydraulic brake system overrides the pedaling of the passengers. The driver is trained to control the behavior of the passengers. Cycle Party offers helmets for those who would like to wear them.

Cycle Party carries liability insurance of $1,000,000 per incident and $2,000,000 in the aggregate.  The City of Fort Lauderdale will be named as co-insured.

CYCLE PARTY IS NOT A NEW CONCEPT: The group-bike concept has been in existence in Europe for over a decade and there are hundreds of such bikes operating daily in over 50 cities all over Europe. In the USA such bikes are in operation since 2006. Now 31 companies with over 100 bikes give tours in 40 cities in 25 states. For instance in: Baltimore, Cincinnati, Portland, Austin, Denver, Honolulu, Flagstaff, Tucson, Savannah and Raleigh.

It is time for Fort Lauderdale to join the progressive cities promoting alternative sources of transportation!