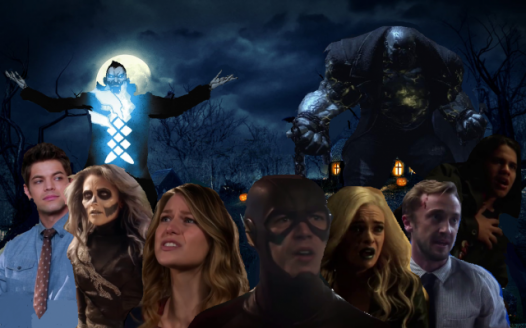 CW to Produce a Supergirl and Flash Halloween Crossover!

Since Andrew Kreisberg and the other CW producers are once again turning down oppertunities for Halloween episodes on Flash this year simply just by making season 4 have a six month time jump from the third season finale on the count of them refusing to manage the first three episodes of the fourth season without Barry being back on the team as well as rushing plain Caitlin Snow back onto the team as well, it's time to start planning things ahead for next year by convincing them on twitter, Facebook, or in person to have a Supergirl and Flash Halloween Crossover planned for next year's Halloween and they are to include the following to make it worth watching:

1. Have Italia Ricci back for the third season finale on Supergirl as Silver Banshee so she can return as a series regular for season 4 since Siobhan Smythe is Kara's best friend in the New 52 and on the count of her father, the Black Banshee being the villain needed as the girl of steel's season 4 big bad, her character also should interact with members on Team Flash since Siobhan is just like Caitlin when it comes to fighting inner demons and having issues with nerds who can't keep secrets over their conscience bothering them

2.Solomon Grundy from Earth 38 and the Black Banshee are to be the villains for the Halloween Crossover in 2018

3.The plot of the crossover is to take place on Earth 38 and in that Earth's Central City

4. The crossover is also to be where Siobhan and Kara discover that the Black Banshee is her father while dealing with the likes of him and his men and helping Barry stop him and Grundy from targeting his doppleganger and parents on Earth 38 in any attempts of retaliation

5. No one dies in this crossover except for Grundy and a bunch of minor and background characters

Now let's make sure to inform the following before signing this petition and reach out to the following actors to help persuade the producers into developing this crossover for next year as well!