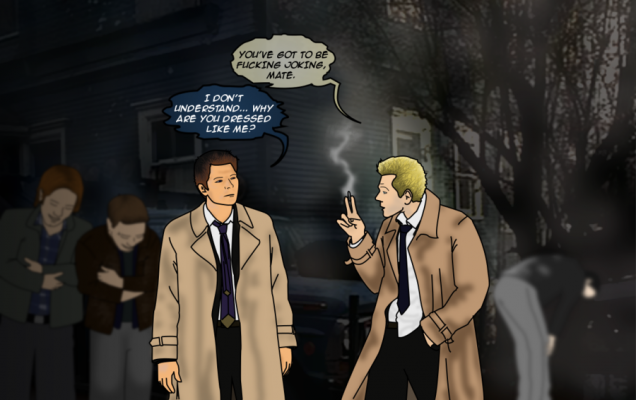 Dear Creators of the shows Supernatural and Constantine;

We the people, we the fans, request a Supernatural- Constantine crossover. Before it had only been uttered a few times online, but seeing the success of Scoobynatural, we see that a Constantine/Supernatural crossover is plausible if there is enough uproar about this. Now that Constantine is on the CW and Matt Ryan guest stars in some shows, we think that there is a possibility for Matt Ryan to have a story line with Supernatural.

Why does it make sense?

For instance, both shows form alot of their storylines and mythology using ArsGoetia/Solomonic/Enochian magick rituals, of course, the rituals on the shows are changed, dramatized and given the Hollywood Sparkle but for those of us that practice in the occult, it's very easy to pick out what the seals and rituals are based from.

I think their personalities would make the episode and storylines fun and interesting. Everyone knows that John Constantine is impulsive, selfish, cocky and he is an asshole which is why he is loved. He doesn't try to be someone different and despite his shortcomings always ends up doing the right thing.

Dean Winchester is cocky too, and he has trust issues. I can see these two personalities clashing at first.

I think the fact that Castiel and John basically wear the same thing can be a cause for comedic relief. Constantine's Witt and Castiel's innocence can be a runon gag for the show and the storyline for the crossover.

Jack could be a great storyline. Constantine shows up to kill Jack knowing that he is the son of Lucifer and gets in trouble with Cas and the Winchesters.

There is an infinite amount of storylines that can surface due to this mash up.

Crowley whom is truly missed -was taken away from us and you guys replaced him with “ Captain Kirk “ Prince Asmodeous (which could have been a good plot but the actor is too much of a caricature) . If you ever bring Crowley back, I also have an absolute ton of ideas for his storyline. Seriously. I heard that Crowley was let go because there wasn’t much more to do with Crowley, but, you’re wrong!

If your creative team cannot “conjure” up valid stories for a beloved fan favorite then that team needs to be fired. Supernatural exists because of the fans. We make it happen. Throw us a bone. We would much more enjoy Crowley back! We would also love that Constantine crossover and I volunteer to help write it!