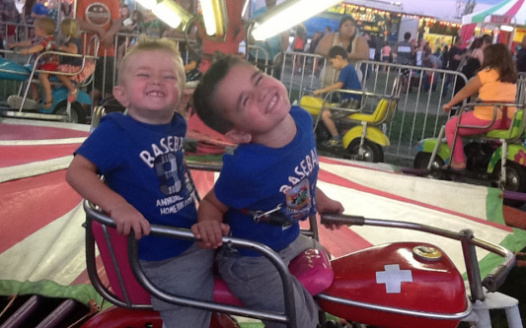 Stand With me to Change The Custody Evaulation Process

I'm a single mom of two wonderful and amazing boys trying to change the process of custody evaluations. I want to ensure that evaluator's follow protocol, policies and procedures and regulations. I want custody awarded based on what truly is best for the child(ren). Custody should NOT be awarded joint custody if it is not in the best interest of the children, puts them at risk either physically, mentally, emotionally and sexually. Allow my to explain why I wish this to change.

During my separation, my ex requested a custody evaluation which the judge granted. Evaluators are required by state to follow specific regulations and points during their investigations to determine what is best for the children involved. List follows:

Other requirements and regulations are listed also.

During the investigation, the evaluator conducted the interviews between myself, my ex and his live in girlfriend. Except for the interviews conducted at the evaluator's office, not including the children. Evaluator's are required to conduct interviews with contacts provided to them by both parties to gain insight and information about the parties in the evaluation, along with any relatives that may reside in the home of the parent being evaluated. Our evaluator did not contact any party provided to her.

Evaluator's are required to investigate and take seriously ANY/ALL reports of abuse to either the former spouse, the children or both. There was evidence of verbal, mental, emotional and sexual abuse to myself as well as verbal, mental, emtional abuse to the children (not only by my ex but his live-in girlfriend). She did not contact the counselor my ex and I had been seeing who was aware of and knew of the abuse and my ex's tendencies and patterns. Written testimonies were provided of neighbors and friends that had witnessed the abuse from both my ex and his girlfriend. Evidence was provided of pictures of bruising and marks found on my children upon returning from my ex's home. Fingernails were often cut to the quick where bleeding or bloodlines could be seen. All of which was also reported to child protective services. She ignored all of it.

During the time of our separation, a Temporary Order had been in place stating that both parties were not to have any members of the opposite sex-who was not related-spending nights in the homes while either party had the children residing with them. It had been proven in court that my ex 's girlfriend not only spent the nights, but had moved in fully a few months after our separation.

Fully aware of this, along with the evidence already proven in previous court appearances showing evidence and the pattern of lies, abuse and control both parties exhibited, the evaluator listened and sided with my ex and his girlfriend. She chose to listen to their words instead of the truth and evidence, and gave them what they had sought for-joint custody.

To add insult to injury when I inquired if I could contest the evaluator's findings/recommendation for custody, I was informed that it would cost thousands of dollars to contest and there was no guarantee the judge would side with me. In fact I was told that there was more chance of the judge agreeing with the evaluator's findings regardless of the evidence to show otherwise the reasons that the custody should not be awarded as it was.

Added to that, I was also informed that custody evaluator's across the board were awarding joint custody to everyone requesting evaluations, irregardless of the situation, conditions of the homes or safety of the children. The term "best interest of the children" has become twisted and lost to the "political" views and "ideals" of people not taking into consideration the conditions children are living in, what they are going through and what really happens when there isn't anyone "watching".

The system is not working in the best interest of the people, and protects the evaluator's and judges from their findings, leaving the families and children at the mercy of their "recommendations". Children are forced to go to homes where there is parental alienation, verbal abuse, mental abuse, emotional abuse, sexual abuse, physical abuse, manipulation, coercion, alcoholism and so much more and there is no escape from it or relief from it thanks to a custody decree that did not evaluate as needed and required.

I am not the only parent that has been dealt this kind of injustice. Other parents have experienced this and been told the same thing I have, that there isn't a chance to change it, that in order to contest you must pay thousands of dollars (even though the possibility it will do any good is low), and they are fighting a losing battle.

I am looking for other parents (fathers and mothers) who have suffered this injustice and wish to change how our system is operating and working and want the law to actually fight for the ones who have no voices; let's spread the word. Sign the petition and let the government know that it's time to change. With the acquired signatures, this will be forwarded to representatives and from there up to the parties that can make this change happen. Take a stand with me. Sign the petition. It's time for the government to protect the children and put their best interests really to heart.