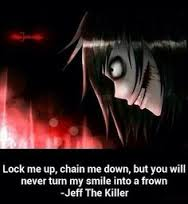 Come on, guys, these people are just trying to make an excuse for their blind hate acts. They're trying to pretend they believe they are doing this for the creepypasta Slenderman (which actually if you look at lore before 2008 when the game came out is a protector of children). The creepypastas, real or not, aren't evil. They are just like you and I. Jeff was bullied and caught on fire, Sally was raped, Laughing Jack was abandoned, EJ was a sacrifice, BEN was abused and drowned, and the others have similar backgrounds.

Up-Vote if you believe that the creepypastas should NOT be banned.