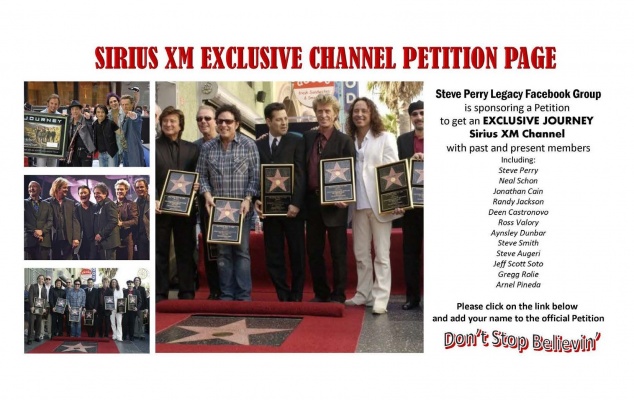 3015 people have signed this petition. Add your name now!

The Steve Perry Facebook fan group, Steve Perry Legacy, is asking for your help in creating a Journey exclusive Sirius XM radio station featuring past and present members, including Steve Perry. Our mission is to come together as one and act harmoniously as we promote Steve Perry's music and legacy.

Steve Perry, an American singer, songwriter, and producer is best known as the unmistakable voice of the rock band Journey during their most commercially successful periods from 1977 to 1987, and again from 1995 to 1998. He had a successful solo career between the mid-1980s and mid-1990s and recently released his new solo album, “Traces” in 2018. Steve was inducted into the Rock and Roll Hall of Fame as a member of Journey on April 7, 2017.

Steve Perry wrote or co-wrote a majority of the songs performed by Journey during his time with them, plus writing songs for three solo albums. Songs include Grammy nominated song, When You Love a Woman, Don’t Stop Believin’, Foolish Heart, Lights (which was used by the San Francisco Giants and the Oakland A’s), Lovin’, Touchin’, Squeezin, Oh Sherrie, Open Arms, We’re Still Here, No Erasin’, No More Cryin’, to mention a few.

Steve draws memories, heartbreak, and emotions for his songwriting from his personal life, making it relevant to listeners. These songs have stood the test of time and have inspired generations. The song Don’t Stop Believin’ has become an anthem of the ages; a song of triumph and motivation.