The Cheshire Pool continues to have issues with the collapsing of yet another bubble. The town’s misfortunes with the plastic bubble covering the Community Pool continue, even though it received a new bubble over the winter last year. The town initially received $284,000 from an insurance claim to repair the pool. Since the pool did not have a dehumidification system, it was not included in the initial claim and ended up costing significantly more than expected. 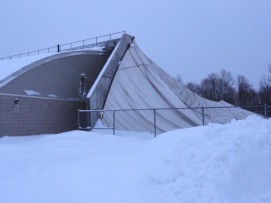 The pool has been hounded by controversy since it was opened in August 2003 and since then has required hundreds of thousands of dollars annually in subsidies from the general fund to keep it operating year-round. The town spent significant money in 2009 getting rid of mold that had developed in the pool locker rooms and making other repairs to the building.

Cheshire residents need to take action !  Please sign this petition if you feel that a new permanent structure should be considered for the pool or the decision to make the pool a summer only option.  This petition will provide you with a voice representing your perspective and opinions regarding the wasteful use of taxpayer dollars.