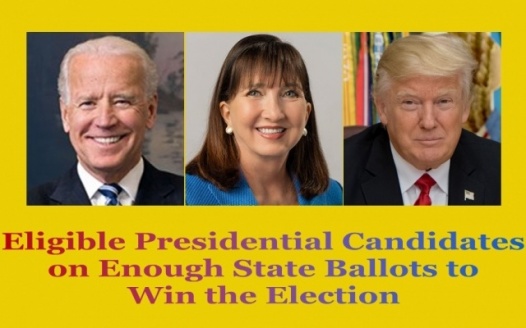 1661 people have signed this petition. Add your name now!

The Commission on Presidential Debates (CPD) controls which presidential candidates get invited onto the national stages. We hereby call upon the CPD to invite any eligible candidate who is on enough state ballots to win the election to debate alongside the only 2 automatically invited.

The CPD’s claim of nonpartisanship is patently false; the CPD is demonstrably bipartisan. Founded and run by the RNC & DNC, it has not invited anyone other than the 2 major party candidates to debate on the nationally broadcast stage since 1992. Did you even know you’ve had other real choices over the last few decades?

Therefore, let it be known that we are watching CPD venues & sponsors for their complicity in this blatant voter suppression, and welcome any & all in demanding that the CPD include all valid candidates. Right now that would mean adding one more, making it 3 candidates debating on the national stage, perhaps 4 if Green Party Candidate Howie Hawkins manages to make it onto enough ballots in time.

Among this term’s candidates expected to be excluded is Jo Jorgensen who has passed all eligibility requirements and is on all 50 state ballots. Dr. Jorgensen is a successful businesswoman, college professor, and scientist with a PhD in Industrial Psychology. She has years of political experience, without having been a career politician. Wouldn’t you like an opportunity to watch her debate the other 2 candidates?

Except that the CPD cleverly imposes ever higher stipulations in its policies so that candidates such as she are effectively silenced. So, excluding the only female candidate during the Centennial Anniversary of ratification of the 19th Amendment granting the Women’s Right to Vote is particularly egregious.

CPD founders & board members have been quoted in court documents saying that America doesn’t need to know the other candidates. We believe that voters in the United States do want to see & hear from all those running who have successfully navigated all requirements to become president.

Even if you’re dedicated to a particular party, staunchly independent, or haven’t voted in a long time, don’t you want to know who’s running for the highest office in the land?