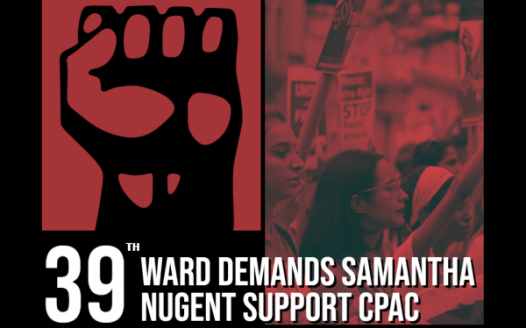 The Chicago Police Department (CPD) has been notorious in recent years due to its lack of accountability and oversight. From the cover-up of Laquan McDonald's murder to the operation of Homan Square, where thousands of Chicagoans were detained without given access to an attorney, it is clear that a lack of civilian oversight and accountability has had a disastrous impact on public safety.

On paper, the CPD is meant to "protect and serve" the residents of the city, but how can we guarantee that the police do so? The Civilian Police Accountability Council (or CPAC) is the answer. A democratically-elected body, CPAC would have ultimate power over CPD policy, as well as who sits on the police board, who holds the title of superintendent, etc. CPAC is the strongest police accountability ordinance on offer in Chicago because it puts the power in the hands of independently elected representatives from each police precinct, rather than the mayor, city council or anyone else.

19 Aldermen already cosponsor the bill out of 26 needed for its passage; the 39th ward's Samantha Nugent is not among them. Please add your name to urge Ald. Nugent to become part of the solution and cosponsor the CPAC ordinance today! She says she firmly believes in police accountability, and this is the best way for her to show her constituents of the 39th Ward that she means it!