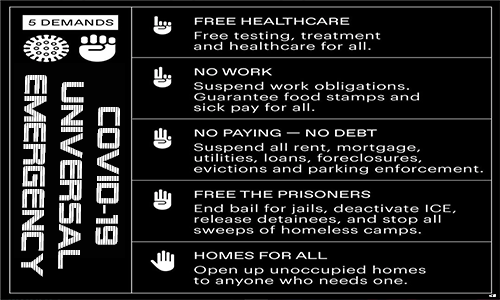 The following entities have been reached out to rebuild a new collaborative sustainable infrastructure together:

As our world is changing, the most creative thinkers on the planet are immediately influenced by this planetary crisis. It is now a revelation what humanity must do to handle the tidal wave of events to come and forever in the future. 10 years of this should help the whole species on every continent will have its’ first chance to design the world we all wanted as children and for our children. Allowing for these horrific world conditions to resonate psychologically, is horrific but with compassion through our very tight communication-information infrastructures of 2020, the economic relationships we have now, do not require us to repeat the history of the 1930's. I personally work in the corporate trade-show ballroom audio-video industry in Manhattan, NY, USA and all my part time scheduled work has been cancelled due to COVID19 terror. However, many people in my field have helped me draft this petition. We are the solution to this confusion: COVID-19 UNIVERSAL EMERGENCY [NOW] !