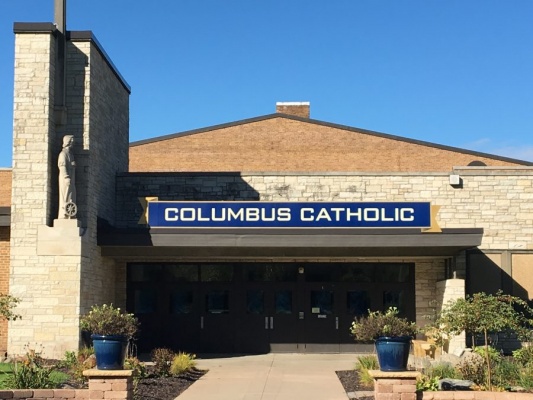 It has become apparent over the last few days that there is a desire among particular alumni to abandon the name of our high school. We are not writing to defend the misdeeds of a man who lived over 500 years ago, but instead are writing to defend the position that the meaning we have found from our school’s name is distinct from the man himself and is consistent with our past understanding of him and the genesis of our school. The Knights of Columbus, the reason for our school’s name, exemplify the best of Christopher Columbus’s traits and have made it their goal to strengthen relationships with God through service and charity. We align ourselves with this organization and its goals, not necessarily the man. Regarding the removal of the statue, if the Knights of Columbus were to dissociate from him, we see no reason not to follow their lead. However, this is a separate debate from the one at hand. We are not historians and there is conflicting evidence supporting both sides about who Christopher Columbus truly was. The primary purpose of this article, and the one we feel most passionately about, is to provide reasons to keep Columbus in our school name. Disowning our name would be a disservice to the Knights of Columbus, their mission, and the school’s students.

Columbus Catholic High School was founded in 1950 and named after the Knights of Columbus. This religious organization was founded during the machine age, which was a time period characterized by widespread poverty. Large corporations controlled cities and subjected people to poor working environments, long working hours, and low wages. The Knights of Columbus was founded to teach young men to be a light in this darkness; to serve their community, Church, and family with virtue in such tragic times. The Knights later turned their focus to serving racial minorities that were often the target of harassment throughout the 1900s.

Like the Knights, the Columbus Catholic School system continues to lead by example in our call to demonstrate what Pope Francis described as “the virtue of a navigator.” The Columbus Catholic school system serves communities locally and abroad. This is accomplished through many works of charity such as donations to local food pantries, volunteer work, and support of Casa Hogar, an orphanage located in an impoverished region of Peru. Most importantly, Columbus Catholic Schools’ mission is to its ministry of education. All students, regardless of race or belief, are taught to be members, leaders, and bearers of the light of Christ in the community.

We live in a time when horrible truths about our country’s past are being reanalyzed by society. The unfortunate truth is that we are incapable of changing what has already happened. However, we can take solace in the notion that we are not responsible for the atrocities of the past. This truth was spread millennia ago by religious thinkers and remains one of the most influential revelations made by Judeo-Christian thought. We are not our ancestors. Our hearts go out to all those who are struggling with the events that have transpired in our country. We pray that peace may be found within all communities. However, we believe our opposition’s motion is misdirected and resides with misgivings about the relationship between the Knights of Columbus and Christopher Columbus; not with the school system. We hold that the school is named in recognition of the organization that initially funded and inspired the character of its educational goals. It is important to learn from our past, be awake in the present, and look forward with hope to our future. We recognize that Columbus Catholic Schools does not celebrate the terrible acts of Christopher Columbus. In our community, the name Columbus is not necessarily recognized as the name of a 15th century explorer, but rather as an institution that works in service of the common good. The Columbus Catholic School system works endlessly to bring a separate meaning to the name, Columbus. Therefore, we who have signed believe that the name of the school system and the efforts of the faculty within it should be retained.