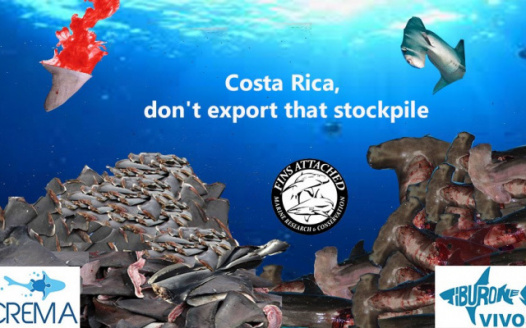 In 2013, former Costa Rican President Laura Chinchilla (2010-2014) worked hard with national conservationists to project the nation as a global marine conservation pacesetter by leading the international campaign to include endangered hammerhead sharks in Appendix II of CITES in order to limit the species’ international trade. Soon thereafter the nation became one of the world’s few countries to ban the export of hammerhead shark fins. But as a growing stockpile of over 8 tons of fins sits in the port city of Puntarenas, current President Luis Guillermo Solís’ administration (2014-2018) has worked tirelessly to lift the ban and allow its export. Despite two official scientific panels of independent and government experts determining that the international trade of hammerhead shark products is detrimental to the species’ survival and shouldn't be allowed, the Solís administration has disregarded the panels’ scientific advice. Furthermore, it has appointed the Costa Rican Fisheries Institute, an entity overtly controlled by private fishery sector interests, as the new scientific body charged with deciding if the export of hammerhead shark fins should or shouldn’t be allowed. If the export of the stockpile is eventually allowed, the country would be a shameful example to the world of how CITES responsibilities can be circumvented. We want Costa Rica to stop being manipulated by those with economic interests at the expense of the environment and return to being a leader in marine conservation.

Honorable President Luis Guillermo Solís, we hereby respectfully ask you to thwart all present and future attempts by private interests to circumvent protections granted to hammerhead sharks from international trade, by issuing a Presidential Decree that permanently bans the export of hammerhead shark fins stockpiled during dates pursuant with the current ban.