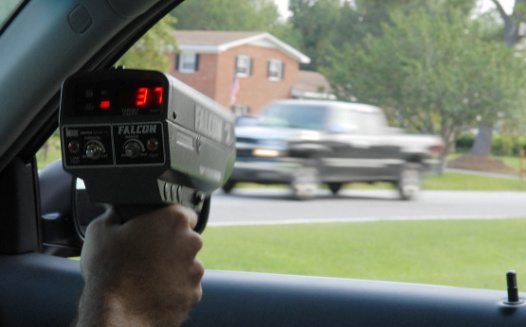 Cops Radar/Laser with Camera built on for Fair and Justified use of equipment!!

If you have ever received a "Radar/Laser" ticket from a police officer there is a good chance this same situation may have happened to you. And it likely left you feeling helpless in a completely 1 sided system that is built to work against the people. If a cop is using a radar or laser and they target a vehicle right now with the current system it's strictly on a word of mouth basis. There is NO proof to provide that the driver was actually speeding other then the officers word. I'm sorry but in the world we are living today there is just no way you can say a humans word is 100% just because they are a cop, it's not justifiable. Today I was driving on a 110km speed limit highway set on cruise control 115km, out of no where a police officer turns his lights on and quickly follows me from centre median. When he comes to the window first thing I asked why did you pull me over? His answer was because you were speeding, clearly taken off guard I replied are you kidding me? That's impossible, I proceeded to ask him if I could see proof of this (record on his radar gun etc) I mean at least something. Only to have him reply with "sorry I didn't lock it in on my gun" WTF?!?! So you can write me a ticket and take food out of my kids mouth without LOCKING it in? How is this fair? So now I have to take a whole day off work and travel to another country because I was working out of town today just to try and fight this ticket which CLEARLY has no backup evidence to prove I was speeding and I will probably lose because that's how the system is designed right now. It's almost pointless to show up and stand up for yourself when it should be fair. My petition is to either require police officers or highway sheriffs that are administering radar/laser traps to have a camera attached to there guns that will automatically take a snapshot of the vehicle in the crosshairs and the speed limit below, similar to what photo radar operators are using. I see NO reason at all that they shouldn't have to have this. They are taking our hard earned money and it is just not fair I'm done handing my money over to them without a fight. Everyone needs to sign this! Fight for our rights!! They make more than enough money to make this happen. Get it done or forever scrap the "I didn't lock it in" excuse because this is the 3rd time it's happened to me alone. It's time for a change!