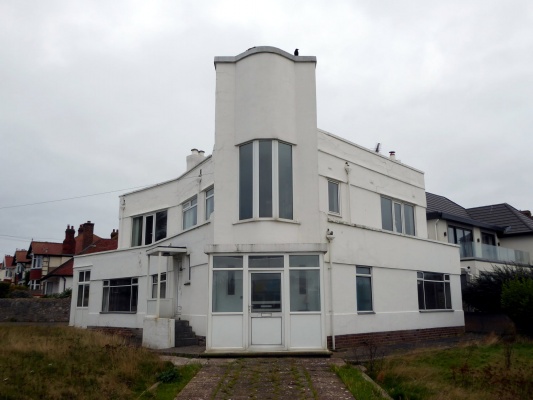 Plans to demolish an Art Deco house in Rhos on Sea believed to have been designed by a famous Welsh architect Colwyn Foulkes have sparked major concerns, so much so that a new campaign group has been set up to fight against the destruction of the area's heritage and this building is one of our major concerns.

The group called Conwy County Heritage watch has stated that this destruction is destroying the area.

1 by 1 these stunning houses are being torn down for blocks of flats sold for more than local people can afford.

This stunning house is at risk of being lost and the developers who have already torn down two other historic buildings, one for a huge carbuncle block of flats.

There are worrying developments in Colwyn Bays conservation area, Abergele Road, and Eirias Park, and the Bee Hotel in Abergele.

BBC energy & environment analyst have now stated due to Climate change: Construction companies have been told to stop knocking down buildings and that all developments should consider restoration and conversion as a 1st option due to the Carbon Emissions and quote "Making bricks and steel creates vast amounts of CO2, with cement alone causing 8% of global emissions."See https://www.bbc.co.uk/news/science-environment-586...

This house is a major part of our heritage, Colwyn Foulkes is responsible for building some of the most stunning buildings in our area https://en.wikipedia.org/wiki/Sidney_Colwyn_Foulke... We are asking that Conwy Council turn down this building and the application for demolition, and instead add this building to the Local Buildings of Historic interest Register. This building needs to be converted, not destroyed.