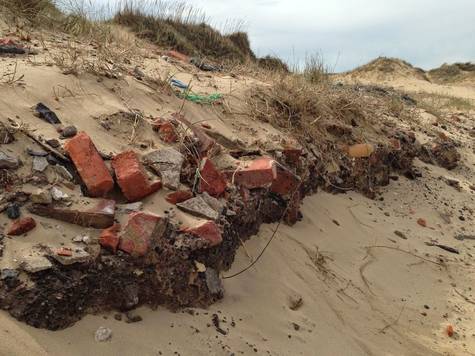 Coatham Dunes in Redcar from Majuba have been built up over the years with artificial materials which are a danger to the public and unattractive to anyone who visit there.

The South Gare area was created by the Steel industries through deposited slag. Sand covered the area and the dunes became a natural phenomena. From the Victorian period the surrounding area was used for dumping waste materials. In Victorian times the Majuba area was a waste site.

The beach area in Coatham was defended during war time and the current wall was built as an anti tank barrier. Other protection were pill boxes, other fabrications and barbed wire fencing. Much of this fabrication was later destroyed and buried in situ although the defence wall remains from Majuba entrance eastwards to the end of the boating lake and current bandstand.

During the 1980's the dunes were built up with masonry and debris from demolitions. It was seen as adding to the natural defensive against winds to reduce shifting sand from living areas and as a way to easily dispose of materials. The work included covering the dunes with clay and sand and the planting of marram grasses from Belgium. Subsequently the dunes have depleted and are severely barren of sand in places particularly the initial mile revealing jagged paving, brick and pointed masonry.

Children are known to play here barefoot and this is located directly adjacent to an unfenced caravan site where visitors unwittingly send their children to play - barefoot! The dunes for many years have been a forgotten about magnet for anti-social behaviour including smashing glass bottles, alcohol cans, BBQ sets, lighting fires, fly tipping, dog fouling and leaving hypodermic needles.

We believe the dunes should be managed to begin conversation and create a beautiful environmental asset and visitor offer. Management will ensure the dunes are developed as part of the visitor destination plan, will make them safe and clean and by doing so will create an attractive backdrop to Majuba beach at Coatham in Redcar, encouraging wildlife and nature to establish.