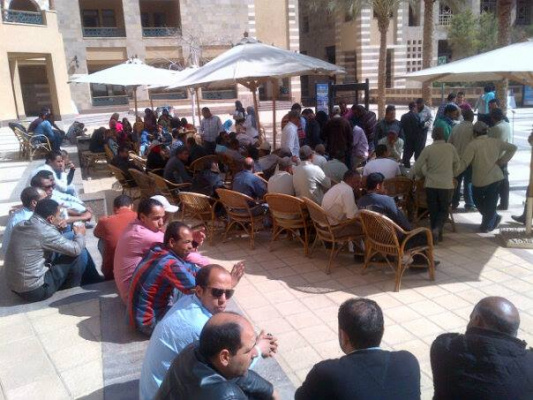 On 17 July 2017, AUC administration announced its decision to outsource housekeeping services to two external companies, resulting in the termination of approximately 256 of AUC’s staff. Many of the housekeeping staff had worked at AUC for over ten years and provided crucial services to the university. None of them were consulted prior to this decision. As a result, they decided to protest their termination peacefully within the university walls and without interfering with normal university functions. In an unprecedented and shocking development, the Administration reported the protesters to the authorities and coerced them into leaving the campus and accepting an unfair settlement.

In consideration of the above, the undersigned would like to express in the strongest possible terms that the actions of this Administration do not represent us. We demand the following for the restoration of minimum trust between the Administration and its various constituencies:

We also call on the University Senate to assume its responsibilities by denouncing the recent actions of this Administration through a resolution expressing their sincere regret as well as gratitude to the workers, and a symbolic vote of no confidence in the administration's actions.

We believe that AUC’s mission, community, and international standing will be seriously compromised if these coercive tactics are normalized. As members of the AUC community with long histories and commitments to the institution, we expect a swift response and a confirmation of action regarding the demands listed above.