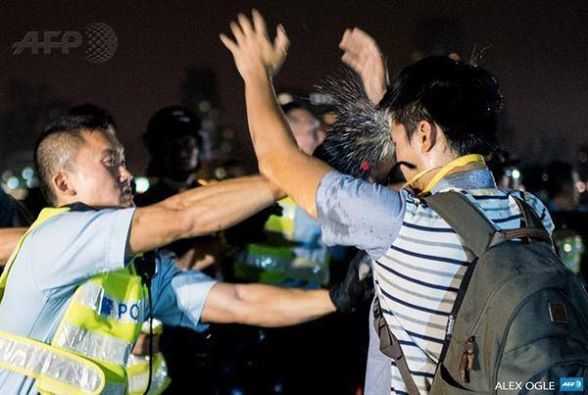 Condemnation against 1015 Black Police in HongKong

Since September 22, 2014, Hong Kong’s pro-democracy students and citizens have been going on strike and attended public demonstrations in support of universal suffrage and in protest against the Hong Kong government’s stated constitutional position. Unfortunately, in view of the government’s failure to meet the protestors in serious negotiations about the constitutional and political future of Hong Kong, these protests continue today.

On October 15, 2014, as shown by several videos and photos from both the media and civilians, the peaceful protestors were subjected to unlawful and unreasonable force. One civilian was even lifted and dragged to a dark corner and assaulted by several police officers (http://bit.ly/1rthT4h).

Tonight, those who are studying overseas and working overseas, those who are unable to spare your time tonight and stand out with the crowd in Hong Kong, please sign this petition to show your support for the peaceful demonstrators and your condemnation of the rights violations which took place on October 15, 2014.

*It is best if you comment with your school and major, if you are in school, or with your occupation, if not.

For freedom of speech, human rights, and to protect our children, I RESPECTFULLY URGE YOU TO HELP US AND SIGN THIS PETITION TO CONDEMN ANY VIOLENCE AGAINST UNARMED STUDENTS AND CITIZENS.