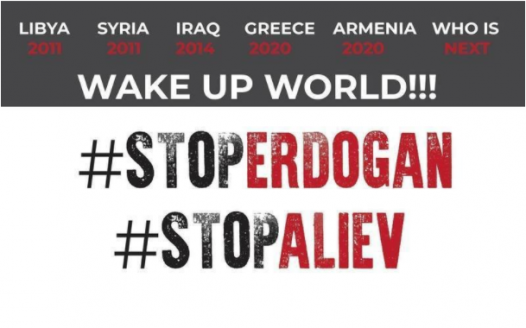 Condemn Turkey and Azerbaijan over Aggression against Artsakh

We are a group of Canadian citizens, many of us ethnic Armenians.

Hereby, firstly, we would like to thank you and the Government of Canada for your recent statements on the suspension of “…the relevant export permits to Turkey, so as to allow time to further assess the situation”, and for raising your concern on “…the ongoing conflict in Nagorno-Karabakh resulting in shelling of communities and civilian casualties”. We truly value your input in finding a solution to the current situation in that region; however, we would like to draw your attention on certain points, which are crucial to stop the current Azerbaijani and Turkish aggression and bring peace to the region of Nagorno-Karabakh.

First of all, we would like to demand you to strongly condemn the reported military involvement of Turkey in this conflict and the deployment of Syrian and Libyan mercenaries, which has been confirmed by several countries worldwide. As a NATO member, we believe that Canada can and should do more than just a temporary ban of “…the relevant export permits to Turkey…”. Canada, should urge Turkey to adhere to NATO’s commitment to peaceful resolution of conflicts, as well as encourage other NATO member states to follow its example of doing so, including banning the exports of weapons to Turkey, that are targeting peaceful civilians of the Republic of Artsakh.

Moreover, as a country, where human rights and universal values are of highest importance, we believe Canada should use its influence and voice the concerns of its citizens in all relevant international platforms, including Commonwealth of Independent States, United Nations, Organization for Security and Cooperation in Europe, Organization of American States.

We are well aware of the joint statement by François-Philippe Champagne, Minister of Foreign Affairs of Canada, and Dominic Raab, U.K. Foreign Secretary on situation in Nagorno-Karabakh region, which again calls upon both “…parties to the conflict (to) stop the violence and respect the ceasefire agreement...” While this statement might urge for peace, it also is extremely neutral and does not address the actual aggressors, Azerbaijan and Turkey. The latter, in its turn, gives the leader of Turkey, Recep Tayyip Erdoğan, the freedom to state that “Turkey will continue to stand with...Azerbaijan with all its resources and heart”, and allows Turkish and Azerbaijani sides to misinterpret the reality.

The ongoing war and the terrorist acts regulated by Turkey are a threat not only for the peaceful people of the Republic of Artsakh, who are trying to protect their right to live and right of self-

determination, but also for the whole region. It is a matter of global security. Thus, we ask you to strongly condemn the aggression of Azerbaijan and Turkey towards Armenians.

Secondly, as a true believer and supporter of Human Rights, we would like to see Canada condemn the attacks on civilians and civilian objects by the Azerbaijani and Turkish aggressors, which represent clear violations of international humanitarian law. The European Court of Human Rights (ECHR) has granted two interim measures in the cases of Armenia respectively versus Azerbaijan and versus Turkey. The ECHR’s second decision particularly states “The Court confirms its decision on September 29, and calls upon all states, directly and indirectly, involved, including Turkey, to refrain from taking any measures, in particular, military action, which might entail breaches of the Convention rights of the civilian population”.

Azerbaijani and Turkish forces are shelling populated cities, civilians and civilian infrastructures, including schools, hospitals, and kindergartens using prohibited weapons. According to Amnesty International, Crisis Response experts were able to trace the location of the footage to residential areas of Stepanakert, and identified Israeli-made M095 DPICM cluster munitions that appear to have been fired by Azerbaijani forces. As they state, “The use of cluster bombs in any circumstances is banned under international humanitarian law, so their use to attack civilian areas is particularly dangerous and will only lead to further deaths and injuries,”. The Foreign Ministry of Artsakh informs that on October 6 several projectiles of “Smerch” fired by the Azerbaijani armed forces struck and exploded near the International Committee of the Red Cross office in Stepanakert, Artsakh.

And thirdly, we believe that there is an undeniable need to undertake collective measures of the entire international community, including those of a coercive nature, to end the illegal and aggressive acts of Ankara and Baku in a situation, when they both enter into an open military alliance with terrorist organizations. The latters are outlawed by the civilized world and pose a serious threat to the global security.

Two large-scale armed attacks by Azerbaijan on the Republic of Artsakh over the past four years clearly demonstrate that the previous concepts of the mediators proved to be ineffective against Azerbaijan’s flagrant disrespect not only for its international obligations, but also for the norms of international law. In this regard, the international recognition of the independence of the Republic of Artsakh will not only allow the immediate end of the ongoing aggression, but also exclude the possibility of its repetition in the future. In current situation, international recognition of the Republic of Artsakh is the most effective means of ensuring peace and security in the region, which will guarantee a solid basis for the negotiated settlement of the conflict. Therefore, we urge Canada to recognize the right of self-determination of the Armenians of Nagorno-Karabakh as the only possibility to guarantee their security.

We truly believe that Canada will take a firm step and defend the peace and the global security of the region.