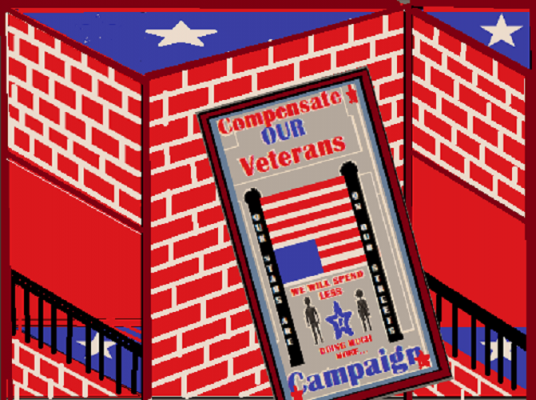 US combat / hazardous duty veterans are NOT being screened for emotional injury during their discharge medical examinations.They are not given self assessment information or told of their probable injury. Their injuries manifest in the forms of depression and impaired behaviors,such as emotional outbursts.

Their relationships at home and work suffer until they fail! This leads to estrangement from family, loss of income and loss of housing!

Those are the circumstantial losses that are at the root of our veterans' suffering and ultimate suicide! The veteran and their family are grieving and confused because none of them know of the veterans' injury!

The Department of Veteran Affairs is not addressing or taking accountability for our veterans’ injuries! They are boasting of their many actions, such as suicide analytics and mitigations, they are applying! None of which make up a plan or have any clear objectives. They are mere Mitigation that will NEVER serve our veterans' needs!They take many expensive, ineffective mitigating actions that have had little impact on veteran homelessness over decades and yet they do not shift course!The most affective outcome of the housing mitigations is building the wealth of property owners and Property managers through years of dedicated subsidies that ultimately build their property assets and have little positive impact on our homeless veterans!

The problem is, The Department of Veterans Affairs are looking at millions of service records instead of talking, examining and relating with the real souls that are on our streets in despair!

I have spent the last 23 years listening to our homeless veterans' stories and events that commonly take place on their path to homelessness and suicide!

It is from the veterans themselves, that we were able to identify these causes and develop resolutions that have clear objectives and predictable results!

The Department of Veteran Affairs has become a monstrosity of an administration of 360.000 employees that is actually absorbing most of the tax dollars targeted for veteran support and spending the remainder on ineffective agendas which are leaving our veterans killing themselves on our streets!

U.S. Veterans' suffering is tragic! Over 70,000 took their own life over the last decade!That's 15,000 more lost than all of our American fatalities in the Vietnam war! A war that lasted much longer than a decade. Many of these suicides are directly related to going homeless, becoming estranged from family and the suffering of depression that is symptomatic of their emotional injury caused by combat / hazardous duty!

The Department of Veteran Affairs is also blocking these same veterans from injury claim "benefits" with a process that is impossible for a homeless veteran with emotional impairment to complete! It is their policy to have the veteran prove they are injured and prove that injury is

service connected! This is an absolute opposition to veterans’ support and is at the core of these veterans' homelessness and eventual suicide! All this while receiving their pay checks that are supposed to be targeted at veteran SUPPORT objectives!

It is an obvious blockade toward emotional injury claims with a burden of proof criteria that labors our injured veterans from any reasonable hope of being compensated! Which further re-traumatizes

These veterans that attempt that recourse! Americans pay hundreds of billions in taxes thinking supporting the VA is supporting our veterans. That is not the case!

It is time to automatically compensate our veterans who have served in combat and hazardous duties!

This will intervene in a way that these veterans never decline to homelessness and inherent, related suicides. It addresses the affects of their injury in the realm of income lost which doesn't allow their quality of life to spiral into a lonely homelessness!

These subjects are too complex to cover thoroughly in the space of this petition. Please see my blogs of supporting evidence and basis of these conclusions!

Let's stand together and insist that our veterans be treated with the care and compensations they deserve.

Please sign this petition to leverage our elected officials to pass theseresolutions into law!

Thank you for taking the time to care!

We, the undersigned, hereby petition the U.S. Senate, the U.S. House of Representatives and the U.S. President to enact into law the following resolutions:

All U.S. combat veterans, upon their honorable discharge from service, shall receive, without process of claim or evaluation, $2,000.00 per month for the rest of their lives.This amount shall be free of federal, state and local tax and will be an irrevocable entitlement to combat veterans from this day forward.

The definition of combat veteran is as set forth in D.O.D. guidelines as combat operations.

All combat veterans who have already been discharged shall receive the above benefit, with no retroactive pay.

All veterans with physical injuries that require/d major surgery and/or deform the veterans' body will receive the combat package of $2000.00 plus and additional $1,500.00/mo for their physical disfigurement and emotional injury! This shall be paid whether or not injury occurred

during an action of combat! The VA shall cease assigning percentile ratings to veterans injuries and automatically award these benefits after

affliction of such injuries.

The current benefits awarded to physically injured veterans are not commencerate to the veterans needs and serves as very inadequate compensation!

their inadequcies and provide proof of The Department of Veterans Affairs apathy toward our veterans' quality of life!

compensation, and NEVER shall a veteran be required to prove service connection or challenged as to the truth regarding severity of afflictions.

They should dependably be able to avoid further aggravation of their trauma by insulting assertions against their character. After all, these

are the people who stood up for this country at great risk to themselves! They are our finest citizens who are not trying to defraud VA coffers!

supect to improprieties taking place at the expense of our veterans! The VA has totally lost thde homeless veterans' trust and have earnecd very

low regard by those who are suffering the most!

The American citizens have always willingly paid for veteran support! Its time it went to our veterans instead of the VA administration to waste!

The aforementioned compensations will be paid upon the veteran's death, to their spouse or significant other for the rest of their natural lives,

and/or to the children of that veteran, until they reach the age of 21.

The direct family (spouse or significant other, and sons and/or daughters under 18 years of age) of any veteran that commits/committed suicide,

after honorable separation from service, shall receive $1,500.00 per month each for the rest of their lives.

The veteran's sons and/or daughters who are 18 years or older at the time of their veteran parent's death by suicide shall receive a one-time, tax-free "beneficiary payment" of $30,000.00.

The veterans that, to date, have committed suicide, will be accounted for with benefits paid to their families as delineated above, retroactive to the date of the veteran's death. Even if they were estranged from their families lives at the time of death!

All veterans will receive the aforementioned death benefits in the form of an insurance policy from AIG upon honorable discharge from active service, with no premiums to be paid by either service member or US government as a payback for the tax monies used to bail out AIG and other

insurance companies through TARP. All veterans previously discharged shall receive the same insurance coverage from AIG at no cost.

All veterans who were deemed incompetent by the Department of Veteran Affairs, or diagnosed with psychological disorders by representatives of that department and placed on social security

benefits because they were deemed not service connected, will receive $4,000.00 per month for the rest of their lives RETROACTIVE to the filing date of their V.A. claim. Social Security payments received to date will NOT have to be paid back, and they will receive a private evaluation under the insurances as described above.

These payments will remain intact and irrevocable, regardless of results of the private evaluation.

This will restore the VA accountability for acting under conflict of interest in their diagnostics prevailing psychosis over emotional injury as to disconnect claims from being service connected injury!

Any veteran interned to a psychological facility as a result of Department of Veterans Affairs evaluations, or those evaluations initiated by court order, will be re-evaluated by a private physician. Those evaluated to be non-violent, and not a danger to themselves, will be released and given the same $4,000.00 per month lifelong benefit, paid for by the corporations that were bailed out by TARP.

Those interned for hostilities and / or actions of physical violence do NOT qualify for this consideration.

Those (non-violent) veterans who remain interned will be transferred to facilities that are built and maintained with services rated at a four-star hotel standard. They will be treated with the dignity and served as

the upper class of society, and this will also be paid for by the financial institutions bailed out by TARP, as repayment for their bailout!. Their families shall receive payments as delineated in the structured heading payments above, retroactive to the date of their internment.

Currently, these veterans are housed and cared for in lackluster facilities of institutionalization that are an inappropriate disposition for our heroes!