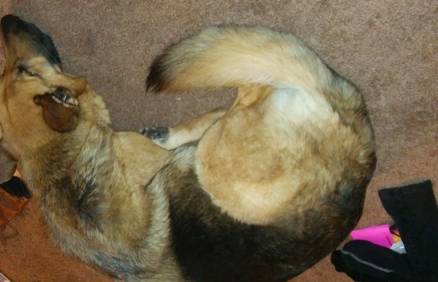 Community petition for the rehoming of neighborhood german shepard

This is a petition to be signed by anyone that lives in the downtown Tempe area. Especially the maple-ash-farmer-wilson area. It pertains to the neglected german shepard dog that many people have seen roaming around the neighborhood quite frequently. Or even seeing posts about him being found constantly. Neighbors and passers by have always stopped to pick him up and take him home and has been lucky to not have been hit by a car yet seeing as how he is out several times a week. The owner does not ever look for the dog and seems less than greatful when caring citizens return his pet. He has refused to correct whatever issue he has with the fence for at least the last 6-12 months. This to me is gross negligence on his part. And the owner just seems to always rely on someone bringing him home for him. Well not anymore. After getting out and being found and returned to said owner. Not even 12 hours later the dog was out and I'm my hands. Having seen posts about him just that day I decided something has to be done. I made a public notice giving the owner 24hours to contact me with proof of ownership, updated tags and collar, county license, and proof of the fence situation corrected. The dog has no collar no tags and his microchip goes to previous owner. Thus I will not be returning the dog without proof of ownership. As of 6am this morning the 24 hour period is over. I have several people interested in adopting him right now and we will be setting up meet and greets for probably Thursday Friday and Saturday. Hopefully having him in his new home by Sunday. This petition is really actually for the owner. Having had incredibly positive response from the Neighborhood in my decision to rehome the dog instead of taking him back where he will no doubt be locked outside and get loose again within 48 hours. This is just to say that we have had enough. We as a community are all tired of this beautiful gentle animal constantly being endangered because of irresponsible owners. The community is tired of giving this guy 1000 chances to actually show he cares for this animal when proven time and time again that he does not and continues to just keep neglecting the situation and relying on the community to always be nice enough to return his dog. Well I know most people that are familiar with this story are backing me up 100%.

So to the owner. We as a community have come together and decided that we will no longer be returning your gentle giant to you for continual neglect. Everyone that has signed this petition agrees that the dog needs to be rehomed instead of returned to you for the umpteenth time. This petition is just showing how Fed up all your neighbor's are with your irresponsibility and that we are all tired of seeing this animal constantly be in harms way running the streets of downtown Tempe. So attached to this letter I will include a detailed description of how I found the dog and what happened to the dog after being found(ie. Rehomed and not returned) just to let the owner know that his dog is safe and healthy. But will not ever be coming back. Just in case he is worried and wondering where he is, witch I doubt.

To anyone wanting to tear me a new one for not caring about the owners feelings or not returning the dog. I welcome you to view my post on the neighborhood group page and the post before it about him. Read the whole thing And the comments and then if you still have quams with me well...to bad? As I have been repeating these last days the dogs health and well being and safety are my #1 concern, not the owners.

So please everyone, sign my petition and Lets tell This neglectful pet parent that we will not stand by anymore and just watch this happen over and over again. And that he has had ample time to fix the problem or show that he cares and has repeatedly failed to do anything. And help give this amazing animal a second or third chance at a ❤loving❤ home!!! Thank you to everyone for all your support and help so far. Please feel free to share this on your personal pages.