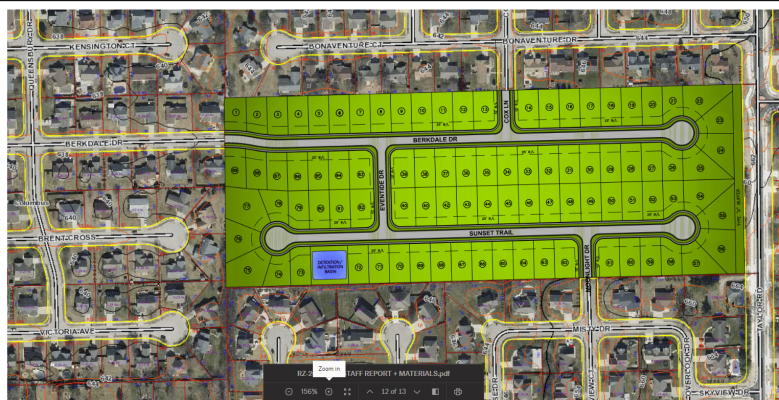 Neighbors from Columbus (including Windsor Place, Greenbriar and Skyview Estates), Joli Development is proposing to rezone from an RS2 to an RS4 for their 18.99 acre lot in the middle of our 3 neighborhoods. They are proposing to build 89 houses in that small space with no access to main roads, which is a density of 4.69 units/acre ... unprecedented in this area. For comparison, our 3 neighborhoods have an average density of 3.09 units/acre.

At an RS2, they could still build 65 homes -- which is a ton for that space -- at a density of 3.5 units/acre, which is still very high. There is absolutely no reason they should be approved for an RS4, and we need to voice our opinions to the public officials we elected to keep this from happening. If it does, it will forever change this area, eliminate natural resources, severely harm the value of our homes, increase traffic and overall risk, and eliminate the privacy we enjoy today in every way. They are also proposing to build two-story houses as part of this, which given the number of ranch style homes in our neighborhood, would allow them to look directly into our backyards. Just think about 89 houses in 18.99 acres for a second ... picture how close together they would be. Picture the increase in traffic through our neighborhoods. Consider the greed of saying 65 houses is not enough and fighting for rezoning to build 89 houses to maximize profits, without concern for those living in these neighborhoods or the impact it would have on the natural environment in that area.

I just moved to my current residence in February from Princeton Park, up on Lowell Road. I witnessed phases 1-3 of the Abbey Place development that was built around one side of that neighborhood, and by the same builder proposing to build here. Needless to say, I’m very familiar with the types/models of homes they build.

The Princeton Park HOA was upset about that building too, and eventually agreed to have the builder add an access road to preserve safety and reduce traffic. Abbey Place also built a sizable walking path, maintained the natural trees, put up recreation equipment, and multiple retention ponds. If you’re familiar with that project, the yards in Abbey Place are not large – they are very much built for the young people and trend you mentioned – I know many people that bought homes in there.

In my eyes, that was the definition of a reasonable build. Like I said, the comparison here is it is the same builder, and also going for the trend of smaller yards. And yet the Abbey Place development consists of 313 lots on 133 acres … again, not much yard. That’s an average density of 2.35 lots/acre. They actually helped the area with a walking path and retention of the natural trees.

To reiterate, this rezoning proposal … and the drawing with the lots you can see on the petition page … is calling for 89 lots on a 19 acre lot, with 4+ acres of currently natural trees. That proposal includes nothing that would add to the community … and the average density is 4.69/acre. I ask you to just think about that for a second. That is twice as dense as Abbey Place with no added resources to the surrounding neighborhoods, and calls for the destruction of much of those 4 acres of forest. If you look at any development like this in Columbus, you won’t find any with an average density approaching what is proposed here … and to get there, they have to destroy natural forest. It’s a negative-negative proposition.

The three surrounding developments have an average density of 3.09/acre with access to main roads. Again, I just ask that you think about the difference there. The RS3 you reference is twice the lot size of this one, and its density is still at 3.52/acre. The proposal is not only out of line with city precedent, but it’s 52% more dense than the 3 neighborhoods that surround it.

They are an RS2. Again, they could build 65 lots under that designation (24 fewer) and would still have a density of 3.50 lots per acre, 13% more dense than the 3 neighborhoods that surround it. That is still too many lots for that size of land, in my opinion, so I just can’t comprehend how this rezoning to an RS4 is really being considered..

There is no denying this will significantly harm the value of my home and my neighbors’ homes, and will undoubtedly eliminate much of the privacy, safety, and quiet we enjoy today.

Each of us has a voice. Individually, we may not be able to make an impact, but if we unite together, we can and will be heard. Please join me in signing this petition opposing this proposal to rezone to an RS4. And if interested, please attend the next public city council meeting on July 5th to let our publicly elected officials know we will not stand for this unreasonable proposition.

This impacts the three surrounding neighborhoods the most, but this petition is open to all Columbus citizens because the decision made here will impact future city developments in an unattractive way by setting a new precedent.